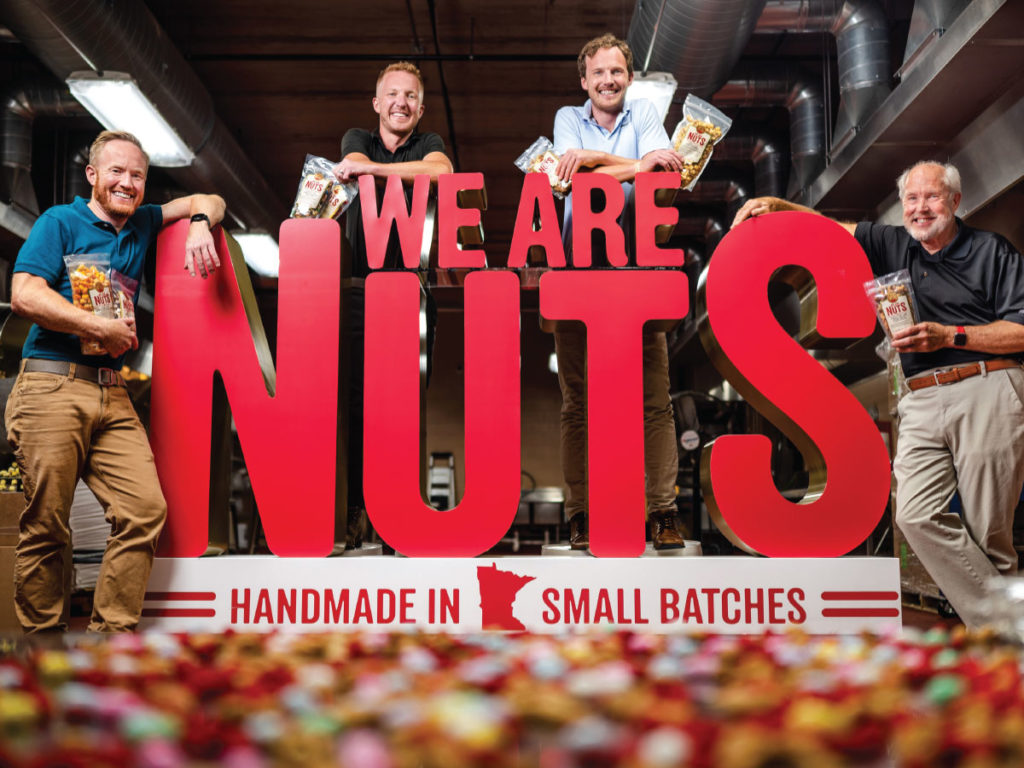 What the company does: Reclaim Center Inc. salvages packaged food and distributes nationally to food banks, dollar stores, and other low-cost suppliers. We Are Nuts is a craft nut and snack company.

Family members in the business: 4_

“The big reason for their success internally is that they have a phenomenal ability to communicate with each other.”

In 1986, Jim Burt left his job selling for a grocery company to start a business of his own: Reclaim Center Inc. (RCI), a national wholesale grocery distribution business that salvages still-edible packaged foods that would otherwise be destined for landfills. Based in Northeast Minneapolis, the company purchases overproductions, package changes, close-dated, and discontinued goods. It sells this inventory at discounted rates to food shelves, discount food stores, and food banks, with a mission to put good food into the hands of people who need it most. During the pandemic, Burt says, the need for low-cost food has been higher than ever.

A year after starting Reclaim Center, he and his wife, Margaret Burt, began packaging and selling their own roasted nuts to 3M employees. What first began as a seasonal endeavor grew into a full-fledged business called We Are Nuts (WAN), which now operates out of a separate warehouse and storefront in Northeast Minneapolis.

But today, We Are Nuts is the fastest growing of the businesses, supplying to restaurants, schools, clubs, and fundraising groups.

Jim Burt’s three sons were under 5 when he started the two companies. Despite the long hours and constant demands, he and his wife, Margaret, who left her nursing job to become bookkeeper for the family business, always made time to coach their kids’ sports teams, act as chauffeur for their many activities, and gather nightly for family dinners or weekly for church activities. The boys—Michael, Tommy, and Jimmy Burt—felt their parents’ presence and commitment. It led all three sons home to work with their parents.

It wasn’t necessarily Jim Burt’s plan to start a family-run business, but it has been “every dad’s best dream, as I get to come and hang out with my three boys,” says Burt, who, at age 73, isn’t quite ready to step back; he says it’s just too rewarding to work together. His wife retired in 2012.

None of the sons envisioned working with their dad, either, although they grew up sitting next to him on the forklift and eating reclaimed food. Without knowing it, they were being prepared for the business.

Tommy Burt was the first to join the business in 2004 at age 24. By 2012, he had convinced his brothers to work at the company too. All three sons attended Creighton University. Tommy Burt graduated with an English lit degree, while Jimmy Burt was pre-med. Michael Burt earned his master’s in finance and had been working for a company in Colorado when he decided to come home.

Early on, they brought in a consultant who administered the Myers-Briggs personality assessment to identify each brother’s strengths and weaknesses. Tommy Burt sees their differences as an asset: “We all come at things differently, and while that could [make it] difficult to figure out how to move forward, we were so close growing up, it is a benefit to us, our strong relationship with one another.”

Tom Zappia has been the family’s business attorney for nearly 40 years. “This has been one of the most successful transitions from first to second generation that I’ve seen. The big reason for their success internally is that they have a phenomenal ability to communicate with each other.”

That collaborative mentality has helped the brothers identify growth opportunities. In 2019, the two sister-owners of Midwest Northern Nut approached We Are Nuts, offering to sell their struggling business. “They were close to shutting their doors,” says Michael Burt. Within four months, the Burts cut excess spending and turned the business around without laying off any employees.

Then the pandemic hit, cutting nut orders in half.

The company brought its “A game to the table,” says Michael Burt, focusing on how it could use the downtime to make the business more efficient, streamline systems, and start a major rebranding initiative.

They brought on Serena Pelowski of Red Lime Creative Studio in Mendota Heights to refresh the We Are Nuts brand. “We worked on logo development and brand consistency on packaging,” she says. “They had a lot of products that were not branded. I wanted to help them enter the marketplace with a lot more local visibility.”

Today, WAN operates out of a 35,000-square-foot warehouse and manufacturing facility, which Michael Burt calls “Minnesota’s very own Willy Wonka factory.” “Our story is that we produce our product in small batches,” he says. The personal touch is evident in its hands-on process of roasting nuts, trail mixes, and popcorn in copper kettles that have been used for generations, as well as in the company’s longtime employees.

WAN has received offers from large, well-known nut companies to expand the business and pump out high quantities of nuts at higher profits, but it remains stalwart in its commitment to premium quality. As Jim Burt says, “You can’t control quality if you are doing big, massive, continuous runs. Bigger nut companies are just trying to produce volume, while we are trying to focus on quality.”

“In food right now, everyone wants local,” she says. “We created the overall packaging and branding to enable them to enter into the marketplace with a lot more local visibility.” Lunds and Byerlys have carried select WAN products since 2013, but Pelowski saw that updated messaging could drive awareness. “They have been here for years, and they are doing amazing things in the community.”

WAN recently partnered with Fit Butters, a fast-growing nut butter company popular in the fitness and bodybuilding community. WAN took over manufacturing and distribution in exchange for equity ownership. “We get this rocket-ship-ride company to work with,” Michael Burt says. Fit Butters is sold at Vitamin Shoppes and Hy-Vee, as well as direct to customers through Amazon.

While the brothers continue looking for growth opportunities, they plan to expose their seven kids, from newborn to 8 years old, to the business, just as their father did with them. Jim Burt’s grandkids are already helping out in the warehouse and learning what it means to be a part of the family legacy. 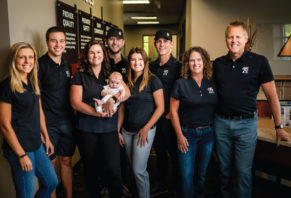 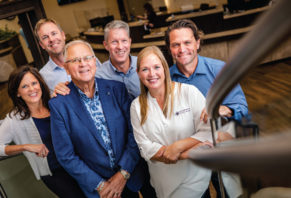 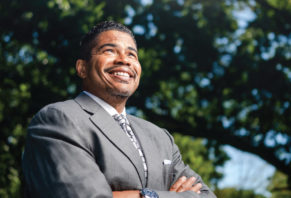 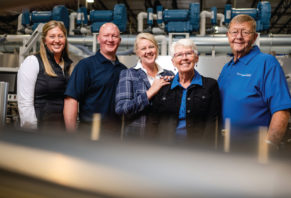