The Semantics Of Food Products 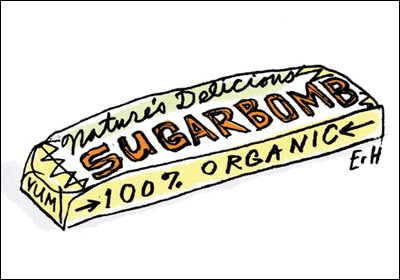 You can’t call sparkling wine “Champagne” unless it comes from the Champagne region of France. But can you call yogurt “Greek” if it’s not made in the traditional way? Can you imply that your product is healthy if it’s mostly made of sugar? Local food giant General Mills is the target of legal action about how it labels two of its popular products.

The chewy snacks are slipped into kids’ lunchboxes by mothers everywhere. They’re a good alternative to snack cakes, right? Not really, says the Center for Science in the Public Interest (CPSI). The organization is the force behind a class-action lawsuit aimed at getting Fruit Roll-Ups labels changed so the product is not depicted as healthy. General Mills says the product is “fruit flavored,” “naturally flavored,” “a good source of vitamin C,” low in calories and fat, and gluten free. That, says CPSI, obscures the fact that the product is mostly made of sugars (both from the fruit concentrate and from corn syrup), artificial additives, and potentially harmful artificial dyes. Further, any health claims for the product—it’s labeled “naturally flavored,” and “low calorie”—are negated by the presence of partially hydrogenated vegetable oil, better known as “trans fat,” which, says the plaintiff in the lawsuit, “many doctors compare to poison,” though no doctors making that claim are identified. The CSPI suit also notes there are, for example, no strawberries in the strawberry Fruit Roll-Ups, even though they’re labeled “made with real fruit.”

What General Mills is doing, says CSPI’s Litigation Director Steve Gardner, “is basically dressing up a very cheap candy as if it were fruit and charging a premium for it.”

The case is under consideration in a California court.

Wrong. In the Alice-in-Wonderland world of corporate food and government regulation, the only thing that matters is if it meets the definition of yogurt. And that’s the entry point for lawsuits accusing General Mills’ Yoplait brand of Greek yogurt of not being “real” Greek yogurt. Yoplait doesn’t make its Greek yogurt the traditional way, by straining liquid out of yogurt to make it thicker and more protein-rich. Instead, a milk derivative called milk protein concentrate (MPC) is added to the yogurt to give it the expected thickness and high protein benefit.

Unfortunately for Yoplait, adding MPC to yogurt does not fall into the federal “standard of identity” definition of yogurt, as demanded by the FDA. More ominously for Yoplait, it was Kraft’s addition of MPC to cheese to make it the more meltable Velveeta that caused the FDA to disallow calling Velveeta “cheese.”

The fight to define yogurt has just begun. In 2009, the FDA turned down a proposal that would allow adding milk-derived ingredients to yogurt, but MPC was not singled out specifically. Now, according to the Minneapolis/St. Paul Business Journal, the FDA will decide whether a yogurt complies with the standard of identity on a “case to case” basis, if the yogurt makers comply with rules and honestly label their products.

Among the law firms bringing suit against General Mills is Minneapolis-based Zimmerman Reed. Attorney Brian Gudmundson is working to pull together a class-action suit. “When people who are health conscious are interested in wholesome foods like Greek yogurt, they’re not anticipating getting MPCs,” Gudmundson says. In a court filing, General Mills, which is being represented by Minneapolis-based Faegre Baker Daniels, points out the “under the current standard of identity, the FDA doesn’t specifically limit milk protein concentrate as an ingredient in yogurt.”

And why does this all matter? Money, of course. Yogurt is a multi-billion dollar business in the United States, and Greek yogurt is the leading edge of that business. Greek yogurt accounted for about 1 percent of yogurt sales in 2007; today, it makes up 35 percent.

All suits are ongoing.