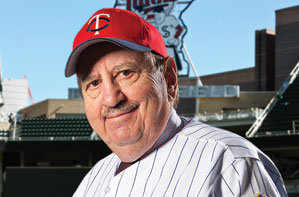 The Twins’ struggles to build Target Field didn’t end when the ballpark was approved in 2006. After that, there was still a long and winding legal road to follow, with the chief guide being Minneapolis attorney Ralph Strangis.

Twins President Dave St. Peter says that while the longtime Kaplan Strangis & Kaplan attorney was instrumental in negotiating the team’s original deal with Hennepin County, he was just as important in later negotiations that cleared the way for securing control of the site and working on it.

Strangis says with the help of attorney Ross E. Kramer of Messerli & Kramer lobbying for the Twins at the Minnesota Legislature, and the assistance of Minneapolis business consultant Bob Starkey, the team succeeded in guiding the project to political approval. But, Strangis added, “I had thought that would be the major part. But even after that was done, it turned out there would be a lot more challenges to building a $500 million ballpark on a small site with multiple governmental bodies to deal with.”

Among his duties were negotiating a complicated deal with Burlington Northern Santa Fe railroad to move its tracks, and coordinating Mortenson Construction’s building of Target Field with the railroad’s busy train schedules.

He also was called upon during a post-approval crisis in 2007, when negotiations between the Hennepin County Board and the owners of the ballpark site hit a roadblock and the county was forced to condemn the property in court proceedings. That dispute was settled when the county was able to proceed with condemnation thanks to the Twins agreeing to pick up the land costs beyond what the county had budgeted.

“We retained some experts in condemnation law that supported the effort while we were in court,” Strangis says. “My colleague Mary Giesler was instrumental . . . on that.”