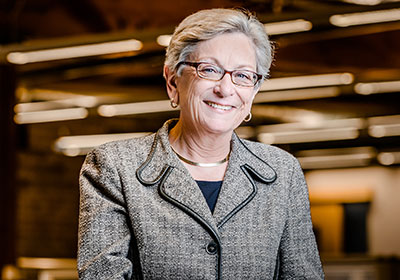 1990 Manager for the Governor’s Commission on Reform and Efficiency

1993 Director of state programs at Medica

1995 CEO and president of UCare

Nancy Feldman didn’t want to become what she humorously calls “the idiot on the 10th floor”—a top leader who’s out of touch with her employees. So in 1995, when she became CEO and president of UCare, the state’s fourth-largest health plan provider, Feldman decided she’d find ways to maintain connections. Some are modest, like having coffee and cookies with all UCare employees after they have been with the organization for six months. Four years ago, Feldman instituted something more substantial—the UCare CEO Roundtable program.

Each year, the program gathers about a dozen UCare employees, who meet with Feldman four times a year to ask questions, raise issues and learn directly from the CEO. Feldman shares her experience and expertise on topics such as leading in times of change, business ethics, resiliency and effective leadership practices. During the program, participants meet with a human resources facilitator who helps them apply their insights to their own careers. Participants also can choose an educational opportunity to further their professional growth, such as the mini MBA program in health care at the University of St. Thomas. So far, 49 employees have participated in the roundtable program.

In addition to her mentoring work, Feldman volunteers with all UCare community initiatives, from calling bingo to raking leaves for senior and disabled homeowners. Among her numerous activities outside of UCare, she serves on the board of the St. Paul-based Center for Victims of Torture. “Nancy is deeply committed to promoting the understanding of health as a human right—not a privilege to access only if you can afford to pay,” says Curt Goering, the center’s executive director.

In 2006, Feldman founded the Bob Feldman Fund of the War Legacies Project in honor of her husband, Bob, who passed away at age 59 from cancer, likely caused by exposure to the herbicide Agent Orange during the Vietnam War. The fund supports families in Vietnam still suffering from the chemical’s long-term effects. To date, the fund has helped more than 350 Vietnamese families.

In addition to helping others, Feldman has taken UCare from a focus on Medicaid plans to encompass Medicare products in the late ’90s, and more recently, commercial products on Minnesota’s health insurance exchange. In mid-2014, she announced she would step down as UCare’s CEO and president this coming June. Thanks in large part to her mentoring of new leaders, she’ll be leaving the nonprofit in good hands. “Though it does take a fairly substantial time commitment on my part,” Feldman says of the CEO Roundtable, “I am pleased at the enthusiastic response of the employees who are selected and the energy they bring to our discussions.”

First experience as a leader: “President of the freshman class at Preble High School in Green Bay.”

Hardest lesson: “My husband’s death. Every other challenge seems small by comparison. It’s not that those [other] things aren’t important. It simply puts them in perspective.”

Greatest current challenge: “Undergoing the transition to new leadership at the same time many changes are occurring within the industry.”

Best mentor: “Ann Wynia, the first female Speaker of the House in Minnesota. She focused on policy and doing the right thing and less on politics. She also faced health challenges with her husband while having a high-powered position, and I looked to her when I went through that.”

Best habit: “Swimming for 40 minutes every morning, Monday through Friday. It helps me maintain my well-being.”