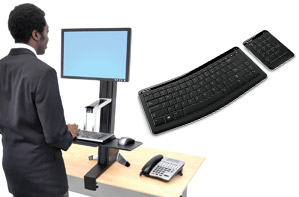 Most computer monitors appear dark when not viewed head on. Samsung’s Magic Angle feature makes it easier to crowd the team around for a video or presentation. Users can change brightness settings for side viewing, standing, leaning back, or group viewing mode. The widescreen-ratio monitor has other business-friendly features as well, including Magic Return, which automatically manages content between two monitors connected to one computer. It’s slim and stylish, measuring less than one inch thick. It offers ultra-sharp, 1080p resolution with vivid colors (although one CNET reviewer experienced uneven light on the left edge of the screen). The monitor is backlit by LED, which cuts power consumption 40 percent compared to traditional monitors.

Pecking away on your touchscreen tablet or pint sized netbook keys just isn’t as productive as working from a full-size keyboard. This wireless carry-along keyboard from Microsoft is as thin as a tablet. It’s the company’s thinnest keyboard ever—just barely thick enough to fit a pair of AAA batteries in the back. As the name suggests, it connects wirelessly via Bluetooth to notebook or desktop computers. Some users complain that it’s slow to wake up after going idle, and that battery life could be better. But an Engadget.com reviewer says unlike most travel keyboards, this one actually feels sturdy. It’s a nice design that uses Microsoft’s “Comfort Curve” layout and has a standalone number pad (sold separately). At about $90, the 6000 is a step up from entry-level, budget keyboards, but the quality build and design may make it a worthwhile upgrade for regular travelers. Also recommended: Microsoft’s Arc Keyboard.

Sitting in front of your computer all day is literally killing you. Health researchers have linked long periods of sitting with increased risks of obesity, diabetes, and heart disease, among other ailments. St. Paul–based Ergotron’s new sit-stand computer workstation is meant to get cube dwellers up on their feet. The “wellness workstation” mounts onto a desk so that workers can alternate between sitting and standing as they like throughout the day. Studies suggest that standing instead of sitting can help burn calories and minimize back and neck problems. The system includes a keyboard tray that raises and lowers with the monitor and tilts back to promote ergonomically correct elbow and wrist placement.