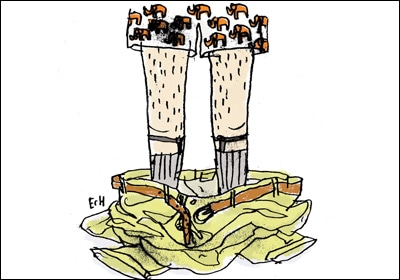 In the Minnesota Legislature’s dismal political year, blogger Michael Brodkorb has done what he always does: turn politics and personal indiscretion into blood-sport and entertainment. Only this year, Brodkorb himself is a topic for bloggers and journalists. The story is ready-made for Brodkorb’s poison pen: infidelity, hushed meetings in coffee shops, tearful resignations from the Senate, and lawsuits.

With his keen investigative skills and way with words, Brodkorb built his political blog, “Minnesota Democrats Exposed,” into a powerful force feared by DFLers and Republicans alike. But it was in his public roles that he could flex his power: he was both the deputy chair of Minnesota’s Republican Party and the communications director for the Senate’s Republican caucus. He and Amy Koch, former majority leader of the state Senate, were described by MinnPost.com as “the two most powerful people in the Minnesota Senate” in a December 2011 post.

Then, in the same month, Koch resigned from the Senate because of an affair she had with a Senate staffer, who turned out to be Brodkorb. The Republicans fired him from both his posts. Then he began suing his old pals at the Legislature: Among the 10 claims he made in various lawsuits was one against the Senate’s top administrator, Cal Ludeman, for defamation of character and slander for issuing a press release accusing Brodkorb of trying to blackmail the Senate into a settlement. He also sued for invasion of privacy and, most significantly, for gender bias in his firing. He claims he was treated differently from female employees who had had affairs with male legislative leaders and did not lose their jobs.

“It is clear that Mr. Brodkorb was terminated based on his gender,” according to his attorney, employment lawyer Phil Villaume, as quoted by the Associated Press. “He intends to depose all of the female legislative staff employees who participated in intimate relationships, as well as the legislators who were party to those intimate relationships, in support of his claims of gender discrimination.” Republicans having affairs? Who knew? But throughout the Legislature, knees buckled and sales of Tums skyrocketed, even though Villaume promised all such depositions would be kept private.

“Maybe they can keep it confidential,” says employment attorney V. John Ella, of Jackson Lewis, “but there’s a principle in our legal system that if it’s in court, it’s public.” He says the testimony of individuals “may be protectable, but that testimony remains a threat because it could leak.”

Ella says Brodkorb’s case of reverse discrimination will be “a very tough uphill battle for him. He has to show that the women who weren’t fired are ‘similarly situated’ to him. And he was fairly high up. So I don’t think he can compare himself to [a clerical worker], someone like that.”

Last September—after the Minnesota Senate had spent more than $100,000 on lawyers to defend itself—U.S. Chief Magistrate Judge Arthur Boylan ordered both parties into confidential settlement talks. By then, Brodkorb had dropped half of his 10 claims. A resolution is expected by the end of 2012.