He smoothed off his talented mentee’s rough edges, and smoothed his own path toward leadership.
April 01, 2020 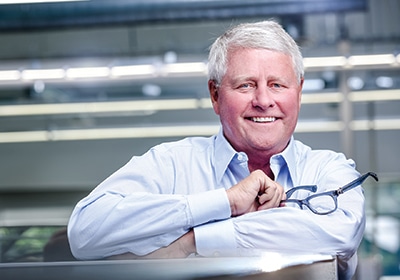 When Reid Porter selected Jerry Johnson to join his team at Onan Corp. in 1989, he knew he had a gem, but one with a lot of rough edges. Porter put Johnson in charge of a newly formed switchgear division of the Fridley-based generator manufacturer. Smart and ambitious, Johnson “aggressively went after sales,” Porter recalls. But the head of quality control wanted to make sure that the products met the proper standards before shipping. The two men’s timetables conflicted, and “there was a little push and shove going on there.”

“We were either going to kill each other or start getting along,” Johnson recalls. “Reid was smart enough to see that we were a lot alike and that he just needed to get us together.”

In order to help smooth the relationship between Johnson and his quality control colleague, Porter sent the two men to the United Kingdom to visit engine plants and handle some business matters. “By the time we got back, our relationship had totally transformed because he sent us there as a team,” Johnson recalls. “We had things we had to get done, and that forced us to see things from each other’s point of view.

Porter’s help repairing an important workplace relationship is typical of how he’s helped guide Johnson. The two men have never had a formal mentor-protÃ©gÃ© relationship. But lessons have been subtly passed along and absorbed over a 37-year professional and social relationship. While at Onan, now Cummins Power Generation, Johnson earned his MBA at Stanford and won a Bush Fellowship. During 14 years at Onan, he rose to general manager and vice president, a post once held by his mentor. While Johnson learned the elements of management from Porter, his own expertise helped guide the company into the new arena of devising electronic controls to connect generators to utility grids. “He was a smart and ambitious guy,” says Porter, “so we looked for ways to give him opportunities to prove himself.”

Porter modeled his unofficial mentorship of Johnson on the one he received from George Faulstich, the McGraw-Edison CFO who guided Porter up the ranks after taking him on to do financial analysis. Porter and Johnson seldom held regular, formal meetings. Rather, most afternoons they would stroll through the plant, Johnson introducing Porter to workers he didn’t know and Porter doing likewise with managers. “He used that opportunity to show me parts of the operation that I didn’t know about,” Johnson recalls.

Porter also oversaw the process of familiarizing Johnson with what by then had become a merged roster of Onan and Cummins distributors—at once handing off some of his own work and instilling some crucial soft skills in Johnson. “I could explain the electronics side of our products, but he was able to teach me how to get distributors’ attention and gain their trust,” Johnson says. “He helped me create a message that would have impact with decision makers.”

Porter took a special interest in showing Johnson that there was a way for him to communicate with colleagues without alienating them. “We spent a lot of time on how he could evaluate and develop people and communicate with the folks working for him,” Porter says. “He was interested in making sure he was aligned with his staff. We probably spent as much time on that as anything.”

Porter left Onan in 1995, putting in time at Renewal by Andersen and Chicago ag-fertilizer giant IMC Global before landing at New Hope-based Navarre Corp. (now Wynit Distribution), from which he retired five years ago. Johnson, meanwhile, took an entrepreneurial path. In 2003, he launched Energy Management Collaborative (EMC), an energy-efficient light-system company based in Plymouth. Before launching EMC, Johnson consulted with Porter.

“Reid summarized that I had acquired all the skills necessary to build an enterprise versus fix one or grow an existing one,” Johnson says. “The final question was: ‘Where will you be happiest and most energized?’ That was the catalyst to making the decision.”

Along with a place on EMC’s board of directors, Porter has an ownership stake in the company. He also continues to provide the kind of counsel that has helped Johnson thrive. “He’s a terrific strategy guy,” Johnson says. “When I need to bounce something off him, I know he’ll draw on his experience to tell me whether something’s worth investigating or whether I shouldn’t waste my time on it.”

The LED lighting industry “is changing so rapidly, it’s like the Wild West,” Johnson adds. “Reid has done M&A work and he has helped me analyze a number of acquisition opportunities. More than once he’s kept me from running down a blind alley.”

Porter is more than happy to continue providing advice and analysis. “Over that much time,” he says “you end up not just being a mentor, but also a friend.”