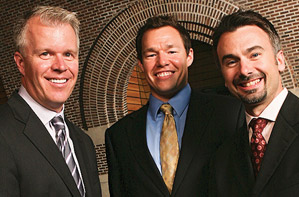 It makes perfect sense: The more stores a retailer operates, the more product the company will sell. Until recently, most retailers maintained one store on the Internet where they sold their goods. Then Alvenda came along and turned the world of e-commerce upside down.

Named for the concept “everyone sells,” Alvenda is revolutionizing the way consumers shop on the Internet. It created the first shoppable ads, or shoplets; it opened the first e-commerce store on Facebook; and it is now teaming with Facebook for the Holy Grail of e-commerce: the combination of social networking and shopping.

“It gives the CEOs goose bumps, says Wade Gerten, CEO and cofounder of the Minneapolis startup. “If you ask them, ‘Where else do you want to open a store?’ their number-one place would be Facebook. It has well over 250 million users and it would be the fourth-largest country in the world.”

Gerten and Brian Howe, former Target.com marketing chief, powered up Alvenda in 2008 to help retailers sell their goods all over the Internet. So instead of operating one e-commerce shop, companies open 1,000 or a million with a shoppable ad. Branded to each retailer, the highly interactive shoplets encourage consumers to enlarge a banner ad, browse, and shop while remaining on their original Web site.

“We basically make it easy for people to shop, and then they shop a lot more,” says Gerten, who used to be vice president of product strategy at Oracle Retail.

And if these shoplets weren’t groundbreaking enough, Alvenda really got technology and retail circles buzzing this summer when it opened the first e-commerce store on Facebook, also for 1-800-Flowers.com. All of a sudden, retailers’ distant dreams of using social networking for new sales channels became reality.

Alvenda is planning another breakthrough for the holidays: Facebook users will be able to create registries or wish lists at other retailers’ sites and “share” them on their newsfeeds or personal sites. That way, friends and family can buy each other gifts directly from their Facebook profiles, or groups of people can pool their money to buy presents for one person. That’s truly socially networked shopping.

The company got lots of press after Facebook announced that 1-800-Flowers.com and Alvenda engineered the first retail sales on its site, including articles in the The New York Times, The Wall Street Journal, and Financial Times, and a piece on Bloomberg Television. More than 200 retailers contacted Alvenda to see if it could develop shoplets and Facebook stores in time for the holidays.

Retailers are excited about the results, and they also like the company’s sales structure. It creates the ads gratis; Alvenda’s revenue streams in from commissions every time someone makes a purchase from a shoplet. This set-up attracted 12 retail clients for Alvenda in its first year alone.