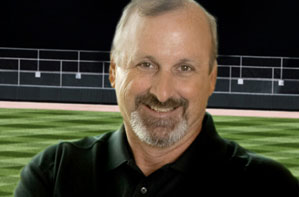 Highlight: Making Target Field fit “the toughest urban ballpark site we had worked on in 25 years”

The company name may not be familiar. But it represents an architecture firm with a long history in building sports stadiums. In January 2009, the sports practice of Kansas City–based HOK split off to form a separate firm called Populous.

Santee brought with him the imagination and skill necessary to cram a modern Major League Baseball stadium into an extremely challenging eight-acre site. But he admits that the Target Field site—with its active railroad tracks, its position in a low-lying ancient riverbed, and its tight fit between two existing bridges—gave him pause.

“For us, it was the toughest urban ballpark site that we had worked on in 25 years,” Santee recalls. But at the same time, he adds, “it also offered a tremendous amount of possibilities [for] how we could engage the city in a way that we thought was authentic.”

The fact that the site had an adjacent commuter rail line, a light rail extension, a major bike trail, and a Metro Transit bus terminal in the next-door parking ramp appealed to him, because he saw that he had an opportunity to design “the most transit-connected venue in all of sports. You enter and exit the site directly to transit, and it all became integral to the design. We saw that we could engage the city in a way like no other stadium site in America.”

Another unique element that inspired him was that because the ballpark site sits low in a valley, its height, or “view shed,” wouldn’t overwhelm the surrounding downtown buildings, but instead seem a natural extension of them. He also voices pride over his choice of local limestone for the stadium’s exterior, a nod to Minnesota’s natural heritage.