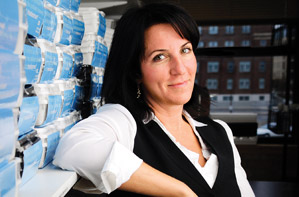 While in Jamaica in 1990, Devee Joy found herself daydreaming about a subject not typically associated with vacations. “I started thinking about how disorganized kitchens were,” she recalls. “And then I thought of the junk drawer—the biggest, messiest drawer in the kitchen. I thought ‘I should make a junk-drawer organizer. Everybody will buy it.’”

Not everybody, perhaps, but a lot of people nonetheless. Joy’s St. Paul–headquartered company, DV International, is now a $16 million business. DV International’s Madesmart line of kitchen and office products, manufactured in China, are sold through Target, Lowe’s, OfficeMax, Amazon, and other retailers. International sales—in Brazil, Australia, Canada, the United Kingdom, and Mexico—account for approximately 10 percent of DV’s business.

Joy’s daydream became reality almost as soon as she returned from Jamaica. At St. Paul’s Hill Reference Library, she found a book on how to trademark products. She got her father to make a plaster of Paris prototype: a simple tray with separate compartments like those of a TV dinner, designed to fit snugly in a drawer. Then she called Target.

“Back then, there was one guy who bought all the housewares,” Joy recalls. “He gave me an appointment! I went in there by myself, with my prototype, and I said, ‘What do you think?’ He said, ‘I think it’s really unique and novel. And when it’s ready, I want you to come back and show it to me.’”

That was all she needed to hear. Joy partnered with a local manufacturer to get samples made, and sent them to 500 retailers. Orders soon flowed in from across the country. “I remember looking at my first skid, a 240-unit order, and thinking, ‘Oh, my God—this is going to be huge,’” she recalls. The Madesmart line was launched.

After running the business for five years, Joy married and became a stay-at-home mother while her husband ran the company. Six and a half years after stepping down, she was divorced, with three children under five and a company in trouble.

“We were losing customers, and our products were really stale,” Joy says. “My husband had sustained the business, but he had no vision and he basically created ‘me-too’ products.” Her buyer at Walmart told her he couldn’t tell her products from those of her competitors. “He said to me, ‘Show me new, unique, and different, and I’ll pay attention.’”

“Collections gave me more real estate on the shelves, a more dominant presence,” she says.

While DV International has gotten its style groove back, the company suffered a setback last year when Walmart canceled its $5 million account. But Joy doesn’t necessarily see that as a blow. “The silver lining is it really helped me become more focused, pay more attention, and build a stronger team,” she says. “When you have Walmart, you can get pretty comfortable and a little lazy. Now we are working at better execution, planning, and communication.”

Next up for Madesmart are kitchen- and office- organization products made from acacia wood from the Philippines (nicer than heavy bamboo, Joy says) and new product lines in three categories: electronics, baby care, and pets. “I want to launch in areas where I can be the dominant player,” she adds.

Joy acknowledges that she’s a relatively modest player in the housewares market. “I’m not Rubbermaid, Sterilite, or Oxo,” she says. “But I want to be the best, in a small way, and stand out above them.”