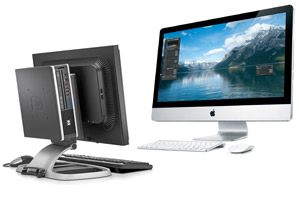 When shopping for a business desktop computer, you want something fast, secure, and built to last. In other words, you want a Mac. Apple unveiled an updated line of its iMac machines last October. The brilliant, LED-backlit widescreens come in both 21.5-inch and 27-inch sizes. The screen is ideal for anyone working with graphics or multimedia. A wireless mouse and wireless keyboard come standard, which means fewer cords to get tangled under your cubicle. The keyboard doesn’t come with a numerical keypad, but you accountants can upgrade for a few extra bucks. The 21.5-inch machines start around $1,199, with the most fully stocked 27-inch edition priced around $1,999. CNET.com concluded that the smaller version offers basically the same performance as its larger-screened cousin, and that among all-in-one desktops, it’s tops in performance for its price range.

The HP Compaq 8000f Elite is a lean, green machine. The compact desktop computer is about the size of a ream of paper. It’s 30 percent more energy-efficient compared to previous models, and it’s the first Windows-based PC made without any BFRs or PVCs—chemicals that pose health and environmental hazards according to watchdog groups like Greenpeace. Getting under the hood is a snap with a no-tool access panel on the side of the box, but there’s not much room for upgrades inside because of the machine’s compact design. Instead, there’s room for expansion via 10 USB ports (four in front, six in back). If you’re not interested in paying extra for a greener PC (the 8000f starts at around $849), check out its more toxic sibling, the 8000 Elite, or Gateway’s SX2840-01.