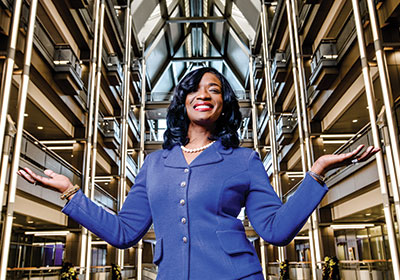 With an industrial engineering degree, an MBA and a fast-track med-tech career, Cindy Kent, the president and general manager of 3M’s Drug Delivery Systems Division, has been a high achiever and a corporate leader ever since she graduated from college. And she sees helping other women achieve as a fundamental part of her work.

Case in point: In her previous position as a vice president and general manager of Gastro/Urology Therapies Unit at Medtronic, Kent worked with “a brilliant and energetic Ph.D. scientist” who she saw had leadership qualities that would allow her to excel beyond her position as bench scientist. Kent helped her take on a role in the company as a liaison between the technical and commercial teams, which in turn has led to other promotions.

“Cindy is dedicated to the development of others and herself, which is one of the key leadership behaviors at 3M,” says Joaquin Delgado, executive vice president of 3M’s Health Care Business Group. One example is her role as a coach and advisor to 3M’s African American Network, one of 12 employee networks that provide professional development, networking and leadership opportunities. In addition, Delgado says, “she is involved with corporate MBA recruiting, she is on the advisory committee for the development of 3M’s leadership competency model and she serves as a mentor for employees throughout the organization.”

Among those mentoring activities: Kent is one of 16 facilitators for 3M’s inaugural participation in the “Lean In Circles,” based on Sheryl Sandberg’s book. She works with a group of 15 women from across the company who meet monthly to discuss topics such as networking, career navigation, gender bias in the workplace and leadership. The group provides support and networking for its members at various stages of their career.

Kent has demonstrated her talent for building connections across various levels in the organization in other ways. After joining 3M, she created what she calls “360 feedback,” in which she shares feedback with peers as well as employees above and below her on the chain of command. “To really be a leader that’s relevant, setting relevant policies, understanding what’s happening and what people are thinking and feeling in an organization, you’re going to have to create channels of dialogue and have an open-door policy that people believe in and know is authentic to really get at the heart and the truth of your organization,” Kent says.

First experience as a leader: “My first job out of college at age 21 was as a staff engineer in a rural pharmaceutical manufacturing site in central Indiana. I was responsible for leading a team of engineers and technical personnel for small capital investment projects.”

Hardest lesson: “Coming in to 3M at a very senior level, the lesson was that you start over and you build your credibility every single time . . . . You create fellowship every single time. I wouldn’t want people to follow me for title alone.”

Greatest current challenge: “Instilling confidence in the organization and confidence in our partners at a time when there are no guarantees in health care in terms of where we’re going and how we’re going to get there.”

Best mentor: H. James Dallas, retired senior vice president of quality and operations at Medtronic. “He told me, ‘You’re going to have to be intentional [about feedback], because the higher you go, the more people are going to talk about you [rather] than to you.’ ”

Worst habit: “Not spending enough time on my physical health.”