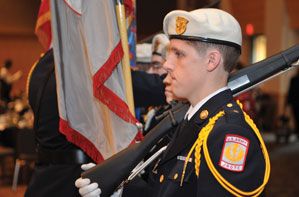 An annual dinner is one of two yearly events held by the Minneapolis-based Center of the American Experiment to promote their mission as a “nonpartisan, tax-exempt, public policy and educational institution that brings conservative and free market ideas to bear on the hardest problems facing Minnesota and the nation.” Programs of the conservative think-tank include Intellectual Takeout (a Web site promoting conservative ideals on college campuses) and a speaker’s bureau. The formal annual dinner has been responsible for bringing an impressive cast of national and international leaders to the Twin Cities as keynote speakers, including George H. W. Bush, Rudy Giuliani, Mikhail Gorbachev, Margaret Thatcher, Henry Kissinger, Colin Powell, and General H. Norman Schwarzkopf.

The Style Laboratory has orchestrated the center’s last four annual dinners, including the 2008 event to honor John Bolton, who served as U.S. ambassador to the United Nations from August 2005 to December 2006. The evening began with a “benefactors reception” at 317 on Rice Park where about 100 guests had a chance to be photographed with Bolton. All of the guests gathered at a larger cocktail reception at RiverCentre followed by the dinner and presentation in the RiverCentre ballroom. Bolton, introduced by Mary Pawlenty, wife of Governor Tim Pawlenty, gave the keynote address on international relations and the war on terror.

In keeping with the theme of international diplomacy, guests holding single ticket “attachÃ© seats” paid $150 to attend, while tables ran from the “Charges d’affaires” table for $1,500 to the “Ambassadors Table” at $25,000. The $25,000 table was topped with copper-colored ribbon-stitched linen, and guests sat on mahogany chivari chairs. The centerpieces combined white hydrangeas, white tulips, white spider mums, and blush roses arranged with copper and burgundy leaves in a burgundy-ribbon-covered vase. The dais featured sequined burgundy plum linens and copper-colored pillar candles accented with white flowers.

“When you end up doing an event over and over again, it can be a design challenge,” says Style Laboratory’s Geri Wolf. “You want to make it look fresh every year, but because it is a nonprofit organization, obviously budget is always going to be a concern.”

The logistics of such a high-profile event can be daunting, Wolf admits, but Style Laboratory has gotten the annual dinner down to a science. “It’s important to break everything down to its components and not get overwhelmed by the big picture,” she says. “Making sure that all the vendors are on board with the timeline is just absolutely crucial.” Wolf says she is honored to work with such interesting and influential speakers.