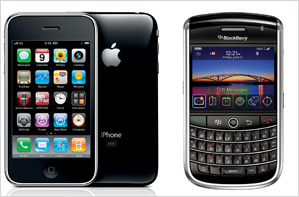 The Smartphone Wars intensified in 2009, with both Apple and Research In Motion (RIM) releasing new products and advertisements aimed at each others’ demographics.

Speed and performance were the big selling points when Apple released its iPhone 3GS in June 2009. According to the company, Web pages and applications load on average twice as fast on the 3GS compared to its predecessor. Under the hood, a series of powerful improvements make the iPhone a much more business-friendly device, one that could challenge RIM’s BlackBerry in the corporate world. Upgrades include data encryption, remote configuration and wireless syncing of e-mail, calendars, and contacts with Microsoft Exchange Servers. Meanwhile, the number of business-friendly add-ons in the company’s App Store continues to surge. There are apps for viewing spreadsheets, apps for tracking packages, apps for managing sales, and the list goes on.

Meanwhile, RIM and Verizon Wireless released the BlackBerry Tour in July, and its 3.2 megapixel camera and souped-up media player appear to be an attempt to grab the attention of consumers beyond the corporate walls. The company also launched an app store, BlackBerry App World, which is helping to inject more games and entertainment features into the devices. The large, 2.44-inch, bright display has the highest resolution of any BlackBerry at 480 by 360. A media sync feature allows users to easily transfer music onto the device from iTunes or Windows Media Player. And it comes loaded with easy access to social networks and instant messaging services, including Yahoo and Google Talk.

How do the devices compare? Both will cost you around $200 up front with a two-year service contract (AT&T for the iPhone and Verizon or Sprint for the BlackBerry). The BlackBerry is optimized for messaging—e-mail, texting, IMs. The Tour features an actual Qwerty keyboard that many believe is easier to use than the iPhone’s touch-screen keys. Apple’s app store and multimedia capabilities are generally considered superior to BlackBerry’s offerings. Unlike the iPhone, the BlackBerry is a global device—you’ll get coverage in 220 countries—but you won’t be able to take advantage of the complimentary wi-fi at your neighborhood coffee shop. Despite years of pleading from BlackBerry fans, the device still doesn’t have wi-fi, which conveniently means their customers are 100 percent dependent on Verizon’s data services.

So which is it then, iPhone or BlackBerry? The decision’s not getting any easier, and we’re going to leave it up to you.