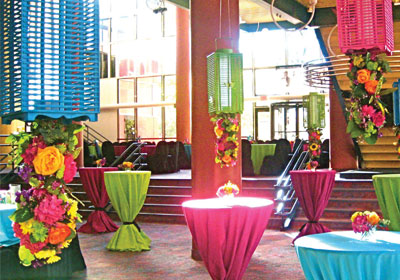 A four-day convention included evening events, each with its own theme and dÃ©cor:

At the Science Museum of Minnesota, A “NEON GLOW” cocktail party with a nightclub feel was decorated with round paper lanterns lit with LED lights and hung from the ceiling, and centerpieces illuminated with neon glow necklaces and bracelets.

The dÃ©cor included wheatgrass that evoked the grass on the ballfield and bright spring flowers reused from the first night’s garlands. Centerpieces were composed of pink hydrangeas and branches of curly willow in tall, clear trumpet vases.

The client asked for dÃ©cor that honored the diverse Latin culture of the majority of its members but which wasn’t condescending. Specifically, the group wanted to avoid a cliched, Mexican pinata–style look. Reusing flowers at subsequent events helped to achieve the client’s environmental and budgetary goals.