Best Promotional Use Of Sugar And Pork 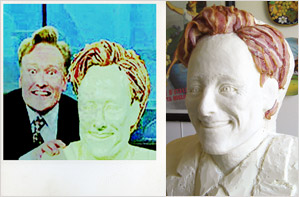 During the summer of 2009, Tonight Show host Conan O’Brien told KARE 11 that he’d attend the Minnesota State Fair if he received his weight in chocolate-covered bacon (one of those curious comestibles one finds appealing only at the fair).

A dangerous promise. St. Michael–based No Name Premium Meats and Seafood worked with Minnesota food sculptor Linda Christensen to create a white-chocolate bust of O’Brien, topped by five pounds of No Name’s bacon fashioned to resemble his coiffure. Bloomington-based PR firm Tunheim Partners helped make sure that the 200-pound bust made it onto O’Brien’s show two days before the state fair opened.

O’Brien never went to the fair, though. And he lost his Tonight slot. (Coincidence? Your call.) But he became something of a folk hero, albeit one with a multimillion-dollar severance package and a new show on TBS. And No Name’s bacon sales spiked.