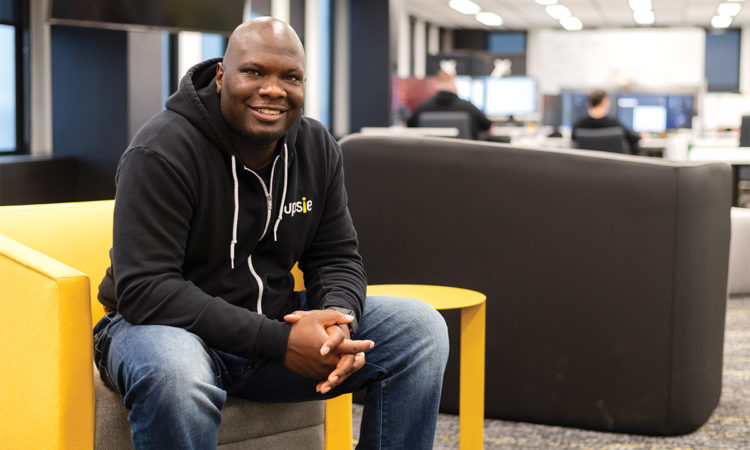 Upsie founder Clarence Bethea on what it's like to be a Black tech founder in Minnesota.
By Allison Kaplan
September 23, 2021

Upsie founder and CEO Clarence Bethea closed on an $18.2 million Series A round in May, more than doubled the size of his staff, and vowed to build his online warranty platform into a multibillion-dollar company in St. Paul. Two months later, he and his family moved to Dallas. What happened? I talked to Bethea about how it feels to be a Black founder in the Twin Cities startup community.

Allison Kaplan: Clarence, as much as I wanted your voice in this first issue of StartMN, I was also very conscious that on panels and in articles, you are frequently “the Black founder.” Does it bother you to get calls to talk about diversity rather than consumer behavior?

Clarence Bethea: I’m not the only Black person who can talk about diversity in our town. But this topic is so massive right now. I get why people ask me. I hear others say, “I don’t want to mess up [my success] by saying stuff.” If I don’t hold the torch for some of this, who else is going to?

A.K.: One thing’s for sure: We’re talking more about disparities in funding now than we were a year ago. Do you feel like progress is being made?

C.B.: The question is not are people aware, it’s what are they doing about it. There are people in our community who I know give a damn: Daren Cotter, Matchstick Ventures, Bread & Butter Ventures [Twin Cities-based investors who participated in Upsie’s latest raise, led by Silicon Valley-based True Ventures]. They’re trying to put more dollars into Black founders’ hands. But I’ve been called the “N word” at startup events. I’ve been held out of things because I’m loud. There are opportunities I know I’m missing out on because I’m a loud Black man.

A.K.: Some might look at the money you’ve raised, awards you’ve won, press you’ve received, and take issue with that statement.

C.B.: I think what we’ve done in our [startup] community is to say, “Look at Clarence!” But I’m just one person. If I told you the stories of other Black founders, of women founders, you would cry. It’s been really evident to me in the last year or so. Cheering on Twitter is different than truly supporting. I had one [white] guy with a corporate background apply for a job at Upsie and tell me he could bring “credibility” to my business. There’s no respect there. I think I’m threatening to people when I don’t need them. If I’m successful, I’m going to give money to other Black founders. It’s no different than what the white guys have done for generations.

A.K.: What has the year since George Floyd’s murder been like for you personally?

C.B.: I got pulled over driving a few miles from my home in Prior Lake. The officer came to the window, looked past me, and said to my wife, who is white, “Ma’am, are you OK?”—in front of our kids. I learned long ago to shut up in those situations, or [I would] be seen as an angry Black man. But there’s a heightened stress with everything happening in Minnesota. I feel like I’m going to get shot by a police officer one day. That’s the level of anxiety. Running a business is hard. I’m worried about my family all the time, and then I’ve got to worry about driving to work or the convenience store.

A.K.: Is that why you decided to move?

C.B.: I had to move somewhere where there was more diversity. Where I was more
normal. In 10 days in Dallas, I’ve seen more diversity than in all my years in Minnesota. [Editor’s note: Bethea moved to Minnesota 19 years ago to play basketball at Bemidji State University. He dropped out to work at a group home and eventually landed a job in the Twin Cities.]

C.B.: The company is staying in St. Paul. I made a commitment to the mayor, and I want to build a multibillion-dollar company in St. Paul. I want to stay involved and remain a light for diverse founders and see the community thrive. This community made me a man and has taken care of my business. But for my health and my family, I couldn’t do it from there. The board, the team, our investors—they understood. The company is thriving in this remote world.

A.K.: Heartbreaking—for you, and for the Twin Cities. How do we make it better?

C.B.: Some of the startup programs must find a way to be more welcoming to Black founders. We have to create an environment where people feel like it’s OK to come through the door.

A.K.: But you’re on the board of Beta, the organization that produces Twin Cities Startup Week.

Exit Strategy: Demystifying the Sell
Calling All Angels
From the Expert: Launching a Food and Beverage Brand
Innovating on the Inside

C.B.: That’s because I will break down the door to get in [to opportunities]. That’s not most people’s mentality. If there’s a biased question on the application, they’re just not going to apply.

A.K.: What would be an example of a biased question?

C.B.: When you’re asking a founder at the pre-seed stage to list their KPIs, there’s entrenched bias there. Most Black founders at an early stage won’t even know what that means. I didn’t grow up with a family where my dad was an attorney and my mom worked at startups. The survey question could be less fancy, like what metrics are you using to measure success?

A.K.: The first time I interviewed you was for an article on mentorship. I know you’ve benefitted from great friendships with both corporate executives and successful entrepreneurs.

C.B.: The great fortune I had was to be mentored by people who didn’t come from where I came from. [Editor’s note: Bethea described himself as a “hood kid” from Atlanta on a 2019 episode of By All Means podcast]. It was a clear advantage to me. When you’re from where I’m from, you’re just looking for a light—someone to breathe some life into you and tell you that you can do better.

Another frustration I have is, I know a Fortune 500 executive who was mentoring his neighbor’s son. They live in multimillion-dollar homes! Why are you mentoring the dude next door, who already has access to the world? Here’s my challenge to our community and all the white startup founders: Go mentor someone you’re uncomfortable with. Find someone on the streets of Minneapolis who wants to get into startups and mentor that kid. Both sides have to get comfortable with being uncomfortable. I promise you we’ll have more Clarences than we know what to do with.