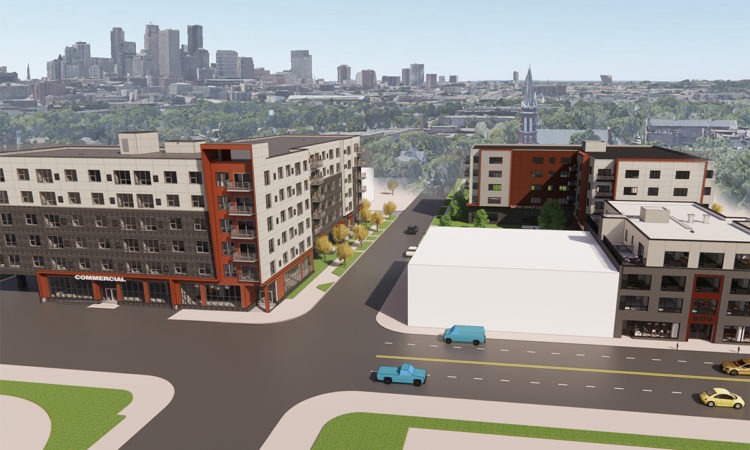 The project calls for a total of 198 units with a mix of market-rate and affordable apartments, along with a senior living component. Pinnacle Mangement LLC/LSE Architects

Minneapolis-based JADT Development Group is gearing up to build a new $60 million housing development in North Minneapolis. The Satori Village project calls for a total of 198 units with a mix of market-rate and affordable apartments, along with a senior living component. JADT is hoping to break ground on the first phase of the project as early as next spring.

“Our perspective is that North Minneapolis needs more than just one kind of new housing. We need more variety, including market-quality options to attract people of varying income levels to live in our community,” said Baylor, CEO of JADT, in a statement.

The Satori Village project will include three buildings. The six-story Satori Boutique Apartments will have 112 rental units, 80 percent of which will be market-rate. New market-rate units have been rare in North Minneapolis. The Boutique will also include 3,300 square feet of street level retail and office space, as well as 82 stalls of underground parking.

Satori Lofts will be a four-story building with 26 units, 62 percent of which will be market rate. The building will also include a small amount of commercial space. The future Satori Senior Living building will include 60 units.

JADT is aiming to start construction on Satori Boutique Apartments and Satori Lofts next spring. The timing of the senior living building is not yet clear.

Baylor’s project will be just to the west of the Cub Foods store on the south side of West Broadway Avenue, the main commercial corridor in North Minneapolis. Cub Foods is housed in a former Target store, which the Fortune 500 retailer closed in 2003.

Satori Village has a wide range of financing sources that can be tapped for the project. It has already drawn backing from private investors, the U.S. Dept. of Housing and Urban Development (HUD), and bridge financing from the Minneapolis office of the Local Initiatives Support Corporation (LISC). In addition, JADT applied for tax increment financing (TIF) from the city of Minneapolis and Transit-Oriented Development (TOD) backing from Hennepin County.

Beyond that, JADT’s announcement of the project notes, “It is in a federal Opportunity Zone, and there is a qualified opportunity zone fund in place for investors.”

Before his real estate career, Baylor played in the NFL for four seasons in the late 1970s, including one year with the Minnesota Vikings. In 2006, DFL candidate for governor Becky Lourey selected Baylor as her running mate. Lourey lost the DFL endorsement that year to Mike Hatch.

Baylor sees Satori Village as an important anchor on the city’s north side.

“This is a gateway project that will open up West Broadway Avenue to more businesses and development that supports a growing population of people of varied income levels,” said Baylor in a statement.