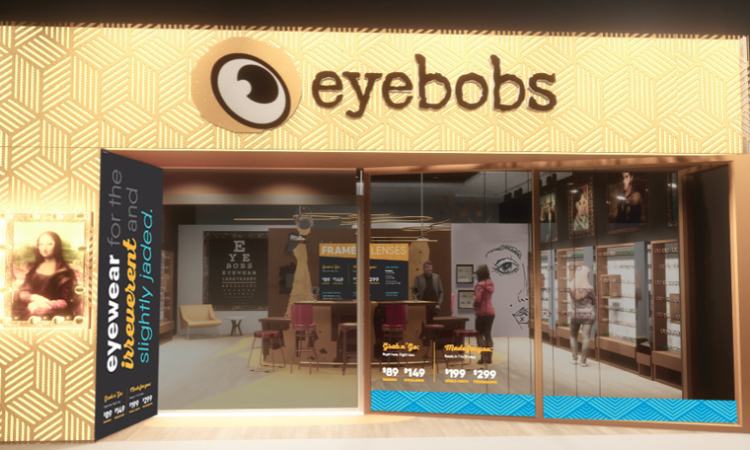 A rendering of Eyebobs' new store at the Mall of America. (Photo from Eyebobs)

The local eyewear brand opens this month at Mall of America with plans for more stores.
By Allison Kaplan
May 08, 2018

Eyebobs, the Minneapolis-based optical brand best known for funky readers that are sold at more than 2,000 stores, will open the doors to its first full-service eyewear store at Mall of America on May 18. A second Eyebobs store will open in August at Florida Mall in Orlando.

Plans to push into retail were set into motion by Hollenstein’s predecessor, Michael Magerman, who became CEO in 2016 when founder Julie Allinson sold part of the company to Norwest Equity Partners and stepped away from day-to-day operations. Terms of the deal were not disclosed.

Buoyed by the steady stream of customers showing up at the Eyebobs offices hoping to shop, and the fact that more than half of customers were putting prescription lenses in the Eyebobs frames, Magerman saw opportunity. Last fall, Eyeobs opened a Retail Lab at company headquarters on Glenwood Avenue in Minneapolis and hired a national design firm to create a retail prototype they could take to shopping areas around the country.

But when Hollenstein took over in December, he delayed the Mall of America opening. He said the design “lacked our soul.”

After months of retooling, he says the MOA store will look less like the original lab at Eyebobs headquarters and “much more irreverent, to better represent our brand.”

Pressed to describe the MOA store, which is not yet ready for previews, Hollenstein focused on the aesthetics: funky artwork hanging from the ceiling; pop art that looks like paint cans spilling onto the floor; a bold, yellow exterior.

“We knew a vanilla store wouldn’t stand out at Mall of America,” Hollenstein says. A bar in the center of the store (which will be located on the first level, near Nordstrom) will be the hub where customers get “styled” in eye glasses. “Helping customers is the whole point of this.”

The in-store Eyebobs transaction will be “quick and simple,” Hollenstein says. But one thing the store may not be equipped to do when it opens this month is connect shoppers to their digital profile from online orders, as does digital-first eyewear brand Warby Parker. “Our goal is to have that done when we launch,” Hollenstein says. But unlike Warby Parker, which built its brand on direct-to-consumer sales before opening physical stores, the Eyebobs business model has been wholesale first.