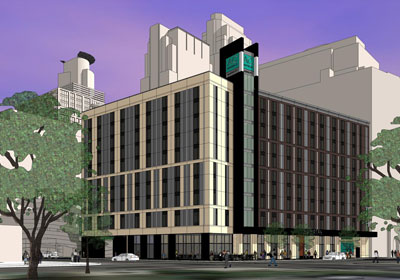 A TPI affiliate acquired the property, which has been known as the William E. McGee Building, for $4.2 million in March, according to Hennepin County property tax records. TPI will convert the vacant office property into a hotel.

“We think it’s a great site. It’s skyway connected in the heart of the financial district downtown. It seems like a logical, no-brainer location,” Tom Torgerson, CEO of TPI Hospitality, told Twin Cities Business. Torgerson notes that the site is close to the light rail transit line and the new stadium for the Minnesota Vikings, which is under construction.

Torgerson says that the Holiday Inn Express is slated to open in June 2016.

While Torgerson is confident in his Holiday Inn Express site, he adds that he thinks that the market is headed for saturation as developers chase new hotel projects.

“I think it will get way overbuilt quickly,” says Torgerson. “That’s just the cycle. That’s the way it works.”

But hotel broker and industry analyst Ted Leines of Eden Prairie-based Leines Hotel Advisors Inc. says that he’s hearing good reports about both occupancy and room rates in downtown Minneapolis hotels. He thinks that the new hotels will fill key niches in the downtown hotel market.

Leines adds that the area around the Downtown East development and the new Vikings stadium are helping to create new demand on that side of downtown Minneapolis.

“That’s completely changing everything on the Downtown East side,” says Leines. “That is really going to drive a whole new market that wasn’t there before.”