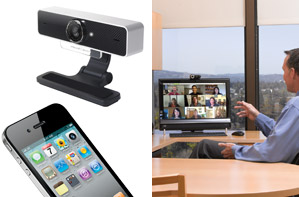 A year ago we spotlighted Vidyo’s conference room product, which uses off-the-shelf webcams to transform any space into a videoconferencing center for under $7,000 (plus the cost of webcams and accessories). That’s a disruptive discount compared to the $250,000 price tags on some competitor’s products. The high-quality service runs over any 2mb/s-or-faster Internet connection. VidyoDesktop Executive, the company’s latest product, turns any touchscreen computer into a videoconferencing station for $1,000. The application, which runs on Mac or PC, was named the best collaboration tool at the 2010 Interop Awards by the Network Professionals Association. Expect to hear more about Vidyo soon. It recently raised $25 million in venture capital and announced a strategic partnership with HP for what Vidyo describes as a big offensive in the videoconferencing market.

A video call’s quality is never better than the webcam it’s running through. If you’re a serious Skype user who wants to come across in crisp, clear high definition, you may want to consider FaceVsion’s TouchCam N1 Skype HD webcam. It’s one of the first high-definition webcams for Skype, and it delivers 720p resolution at 22 frames per second. That’s an impressive step up from the standard blurry pixel blobs generated from low-end webcams. The TouchCam N1 has a built-in dual microphone system with noise cancellation. Several reviewers said the audio was as clean as the picture. And setting it up is as easy as plugging it into a USB port. It’s a little bulky at about four inches wide, and it doesn’t zoom, pan, or pivot once it’s set in place, but it does capture wide angle video. It’s also expensive, selling for around $120. It runs only on Windows.

Is the future of videoconferencing in the palm of our hands? The prospects for mobile videoconferencing got a boost this summer when Apple released the iPhone 4, which comes with a front-facing camera. The extra lens allows for two-way video conversations. However, both participants must be using an iPhone 4 and be connected to wireless Internet. Apple’s FaceTime application doesn’t work with older versions of the phone or over cell phone networks. A CNET reviewer is skeptical about FaceTime, noting that it requires holding the phone in an awkward position during a call.