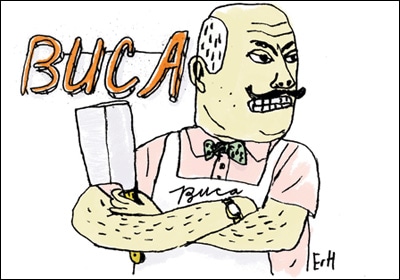 It’s amazing, really, that lawyers don’t get sued more often; probably the first thing anyone who loses a case must think is “I would have won it if my lawyer had done a better job.”

That’s what the folks who owned the restaurant chain Buca di Beppo think about their lawyers at Faegre Baker Daniels. After a decade-long legal relationship, the restaurant owners sued Faegre for more than $3 million for what they consider a botched sale of a restaurant chain. But Faegre sees it in starker terms: “They apparently want its former lawyers to subsidize bad business decisions . . . “ says Minneapolis attorney Bob Weinstine of Winthrop & Weinstine, acting as Faegre’s lawyer.

The first Buca di Beppo opened in 1993 in Minneapolis. A few years later, there were more than 20 outlets nationwide, and the company was under investigation by the U.S. Securities and Exchange Commission. In 2006, three former Buca executives were charged with stealing more than $200,000 from the company. The Minneapolis company that owned Buca sold the chain to Planet Hollywood for $28.5 million.

Buca’s owners purchased Vinny T’s, another restaurant chain, in 2001 for $18 million. Five years later, with that chain faltering, they sold it for $6.8 million. In both deals, they were represented by Faegre.

The owners were ostensibly happy to be rid of Vinny T’s until they started getting default notices for nonpayment of rent on Vinny T’s properties. In a civil suit filed in Hennepin County District Court, they say that in early 2010, they realized for the first time that they were liable for nonpayment of rent by C&T Restaurant Management, the company that bought Vinny T’s.

Buca went Beppo. First they bought back the Vinny T’s franchise to minimize their damages, then they filed suit against Faegre for legal malpractice and breach of fiduciary duty. They claim the law firm failed to include a clause in the sales contract that would include “indemnity for claims and damages arising from the operation of restaurants.” Such a clause, say the restaurateurs, is “usual and customary for sales and acquisitions of restaurant chains.”

But there is no such thing as “standard” language for this kind of situation, Weinstine says. And, he adds, the owners knew exactly what they were signing. “Buca reviewed more than 20 drafts of the stock purchase agreement over a seven-month period,” Weinstine says. “Not one included the provision that Buca claims it thought was in there.”

But Buca claims it specifically asked Faegre to include indemnity language. Faegre agrees that the issue was discussed, but the sales climate was such that the clause was consciously omitted from the final contract. “The buyer had all the negotiating power,” Weinstine says. “Buca had already labeled Vinny T’s restaurants as ‘discontinued operations.’ In fact, to start the process of selling the Vinny T’s restaurants, Buca ordered its lawyers to prepare a seller-neutral stock purchase agreement, which did not include the provision.”

Buca’s attorney, William Skolnick of Skolnick & Shiff, refused any comment because of the impending decision. But Weinstine said: “Nothing went wrong in this deal. Buca got a deal it was willing to accept, and it accepted the deal it got. This case is about sophisticated business executives suffering buyer’s remorse about business deals entered into years earlier.” The case was settled privately in September.