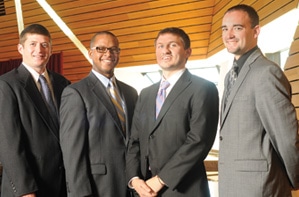 The Land of 10,000 Lakes is home to more than twice as many ponds, and many of these much-loved bodies of water have gone from sky blue to mucky. Lots of pond owners use herbicides and pesticides to rid the water of algae, duckweed, and other nuisance plants, only to compound the problem.â©

Two recent college graduates started Blue Water Ponds to offer pond owners an effective, eco-friendly alternative that has been around for years. They use a biological approach involving barley straw and weed harvesting to remove much of the invasive plants and nutrients that cause unsightly, dirty, and sometimes toxic pond water. â©

Connor McComas, a recent environmental science graduate from Iowa State University, and Ben Schurhamer, who just graduated from the University of Minnesota with a degree in biochemistry, are high school friends utilizing their science backgrounds to grow the St. Paul–based company. They tested their concept for several years during summer breaks and incorporated Blue Water Ponds in 2007 to make a go of the business. â©

“We have great potential in the metropolitan areas. There are so many ponds, and water quality is a huge issue right now,” says McComas. “Not only do people want clean water, but cities want to improve their water quality, too. We can show them long-term payoff and results.”â©

To rejuvenate bodies of water, Blue Water Ponds drops bales of pelletized barley straw into ponds in the spring. As the water warms, bacteria in the pond works to decompose the barley straw, robbing algae and other plant life of the nutrients they need to grow. It doesn’t take long before the water is restored to its natural clear and open state. Even better, the barley straw only needs to be dropped in once a year. â©

Barley straw has been used to clean water for thousands of years, but the process was finessed in the United Kingdom in the 1990s, where it is favored as a sustainable and long-term solution, McComas says. Universities in Oregon and Indiana also have studied and proven the effectiveness of the concept.

“There is science behind it. We didn’t create the science, but we’re working to further the research and put it into practice,” McComas says, adding that it’s important to use natural methods to clean ponds because they’re part of the macro watershed. The water, pesticides, and herbicides in ponds eventually seep into rivers, lakes, and oceans, where they continue to cause significant damage. â©

Pond owners ranging from cities, golf courses, commercial property owners, and homeowners’ associations have started favoring Blue Water Ponds’ methods, finding that they are much better than using chemicals. Using chemicals is a common practice in the United States, but the pesticides and herbicides lower oxygen levels for fish and other living things and wipe out a pond’s entire ecosystem. In the long term, that causes deeper problems when the dead plants sink to the bottom of the pond, where they turn into nutrients that fuel even more plant growth. â©

So far, Blue Water Ponds has treated 100 ponds in the Twin Cities. McComas and Schurhamer recently added crews and equipment, and they hope to expand now that they’ve both completed college. Moving forward, Blue Water Ponds will market a product called ClearWaterMAX. It’s a proprietary liquid the partners developed that can be used in combination with barley straw to treat troubled waters or to prevent algae and duckweed from flourishing. The company has been using ClearWaterMAX for customers during the past year, but the partners will soon begin pitching it online as an eco-friendly alternative to herbicides and pesticides, Schurhamer says. â©

As the partners expand Blue Water Ponds, McComas projects that the company can generate $1.5 million in revenue in the next five years. “That would be a couple thousand ponds treated,” he says. “That’s a lofty goal, but we’re up to the challenge.”

Scientists researching cancer can collect all the samples they want from patients, but the material is limited in its usefulness if it can’t easily be catalogued and searched. â©

University of Minnesota computer science students Rasik Phalak and Blaine O’Brien partnered to develop Oncomir at the request of laboratory medicine and pathology professor Subbaya Subramanian. It’s a data repository of microRNA expression profiles collected from tumors and other tissue, which help classify human cancers. Scientists need to pinpoint a cancer down to the gene to create the most effective treatments—which Oncomir aims to help them achieve. â©

Subramanian had collected a decade’s worth of samples in text and Excel files, but the format made it difficult for him to collaborate with other researchers. “Our main project was to build an application to enable researchers to analyze and store the information,” says Phalak. “We built the back end of the database to allow researchers or pharmaceutical companies to use the data to get started with the process of finding treatments for connective-tissue cancers.”â©

At this point, Oncomir is a product and not yet a company. Future plans include having academics test the database before broadening it to include other cancers and mice data. Eventually, Phalak and O’Brien plan to make Oncomir available online and license the database via subscription.

Despite advancements in materials technology, companies that lay concrete still need a person to manually spray chemicals on the wet material. This prevents concrete from drying before it gets smoothed out with a trowel. â©

A team of students from the new Iron Range Engineering program—a three-university collaboration that provides engineering education to northeastern Minnesota communities—developed a universal applicator that fits onto power trowels and sprays solution automatically.â©

The Power Trowel Solution Applicator (still officially unnamed) saves contractors from paying the labor costs for someone to spray the concrete by hand. It also cuts costs for the chemical because the applicator allows the spray to be applied more efficiently. â©

“There is a quick payback for clients using the applicator because of the money they save on materials and labor. They just need to use it for 40 hours before they pay it off,” says Erin Lamke, one of the students behind the applicator. “It also allows them to get work done faster.”â©

The students first developed the prototype and tested it with Gebhart Construction in Grand Rapids. Next, they sought a patent and are getting ready to commercialize their product. They envision selling their device to end users, typically construction companies that do small-scale projects like home foundations, patios, and driveways, as well as directly to solution manufacturers.