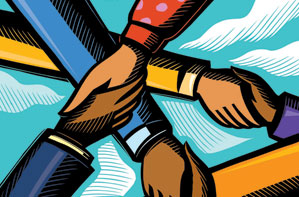 As an active philanthropist and entrepreneur, Steve Bloom enjoyed giving to his favorite causes but thought he could contribute much more than money. He also was frustrated that when serving on nonprofits’ boards, decisions didn’t get made as efficiently as at a business.

“What attracted us to the model was that we write a check and we give our time to the organization while looking at it from a venture capital viewpoint,” explains Bloom, CEO of Pragmatek Consulting Group in Minneapolis and chair of the local Social Venture Partners board. “We can go in and be active with the organization to help them improve.”

Social Venture Partners Minnesota has 27 partner units—mostly consisting of spouses and business partners—and four individuals, most of whom are generally successful entrepreneurs, high-level corporate executives, and professionals with rich experience in growing organizations. Each partner unit gives $5,400 and an average of 24 volunteer hours annually. This grants them a seat at the table to make decisions about where to direct the group’s funds.

Each year, SVP selects an organization where it will invest its full range of resources. In addition to financial support, the venture capital model comes into play as SVP members work with the nonprofit on strengthening its operations and building capacity. SVP members may share their talents in a range of areas, including fundraising, financial planning, technology, or marketing.

Generally, the local group focuses its giving on nonprofits that serve at-risk children and youth. Social Venture Partners forges a three- to four-year relationship with its investees and checks in each year to see whether the nonprofit is hitting performance milestones, explains SVP Minnesota Executive Director Brad Brown.

“SVP satisfies the desires for people to be more engaged. From the boomer generation down there is more of a desire to have a hands-on experience with the organizations that are being helped,” he adds. “This is a great way to do that.”

As entrepreneurs in their professional lives, those involved with SVP also enjoy working with nonprofits that are just getting started or aiming to be more innovative. One such group was Admission Possible, a St. Paul–based nonprofit that helps prepare low-income students for college.

Admission Possible benefited enormously through its relationship with Social Venture Partners, says CEO and founder Jim McCorkell. In addition to much-needed funding when the organization was getting started, Admission Possible developed vital connections through the SVP network. Notably, SVP partner Kathy Tunheim helped connect McCorkell with Bill McGuire, former CEO of United Health Group, whose foundation granted Admission Possible $1.5 million, allowing the group to expand its student base from 600 to 1,300.

Al Fan, a Social Venture Partners board member and co-chair of its investment committee, was attracted to SVP because it “promotes philanthropy while doing philanthropy.” By pooling individuals’ money into one big pot, “I can leverage my giving to organizations I believe in and help groups I want to support grow into more sustainable organizations.”