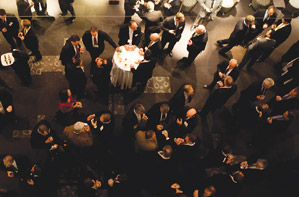 After RBC Wealth Management cancelled its 2009 directors meeting, for 2010 the company decided to bring its branch and complex leaders to the home office in Toronto so they could meet with top Royal Bank of Canada (RBC) executives—an unusual occurrence.

Though the logistics of international travel for 250 U.S. employees were challenging, the event made a lasting impression because guests had the opportunity to interact with RBC’s highest leadership. All 250 attendees had to have current passports. The planners also arranged for personalized letters from the Canadian Embassy, to ensure smooth sailing through customs.

One conference highlight was a reception at the top of the landmark RBC Tower in downtown Toronto. Another was a dine-around-the-city event where six groups held smaller, regional dinners at local restaurants.

“We had very good feedback—everyone was thrilled to be in Toronto,” says Ellie Madson, senior meeting planning specialist at RBC Wealth Management in Minneapolis. “Bringing the event to Toronto and utilizing the bigwigs to talk about the stability and strength of RBC was inspiring for our attendees. Our CEO’s main focus was getting our branch and complex directors hearing from the top how important they are. Then they can go full steam ahead for the next year.”

Usually the annual meeting features meetings and discussions with top executives from RBC Wealth Management. This time, attendees heard straight from RBC President and CEO Gord Nixon, as well as George Lewis, group head of the wealth management division. Most of the two-day meeting was spent in general sessions and breakouts, where the group set goals, strategy, and key initiatives for the coming year.

The culmination of the conference was the traditional awards dinner. Held at the Hilton Toronto, the January event celebrated Canada’s hosting of the 2010 Winter Olympics in Vancouver. Red tulips and roses accented with greens and white flowers graced each table, and the stage and linens also were red. The evening’s menu, with the theme “Canada, Coast to Coast” featured Alberta Black Angus tenderloin paired with Quebec foie gras.

Highlighting the Olympics theme—and solving a logistical problem—Madson arranged for the evening’s winners to receive Olympic-style gold medals instead of the usual crystal award. Not only were the medals less expensive, but the company avoided shipping heavy awards to Canada, and winners didn’t have difficulty making room for them in their luggage.

RBC—a national sponsor of the Vancouver games—screened some of its commercials to be run during the Olympics. Madson also took advantage of RBC’s Emerging Artist program, which offers young artists paid, professional gigs; she hired Toronto pianist Claudia Chan to provide entertainment for the dinner.

Overall, employees reported that the event was a big hit, Madson says: “Being that we did cancel the previous year, bringing it all back together, and to Toronto, was refreshing and motivating for our attendees.”