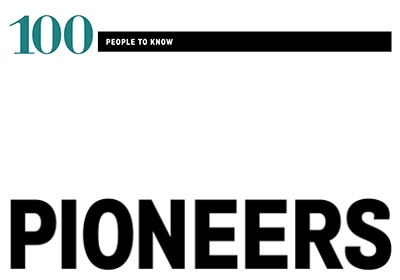 Al Berning is well-known in Rochester as a former IBMer, a co-founder of the engineering company Pemstar and former CEO of Hardcore Computers/LiquidCool Solutions. In his current role as CEO of Ambient Clinical Analytics, the active entrepreneur is a prime illustration of how Mayo Clinic is seeking to establish Rochester as a research commercialization hotbed via Ambient, a spin-off created to market Mayo’s AWARE clinical decision dashboard. Ambient reached a milestone when Dutch multinational Philips announced it was rolling out the real-time patient information device as the IntelliSpace Critical Care Console; in 2017, look for the company to outgrow its space in the Mayo Business Accelerator.

Behemoth General Mills has been struggling to keep pace with customers’ rapidly changing food tastes, but Harvard MBA Ann Simonds, who became chief marketing officer in 2014, will help the multinational food giant outrun today’s food trends. Simonds recently implemented requirements that ad agencies hired to market her firm’s products diversify to resemble General Mills’ customer base. Significant changes to the company’s yogurt and its breakfast cereal lineup are slated to hit the market in 2017, along with Simonds’ innovative messaging.

Microbiologics has a very distinctive product—microbial biomaterials such as bacteria, viruses and microscopic parasites that are freeze-dried but still viable. Customers worldwide, including food-production laboratories and hospitals, use these bugs to test their quality control systems. Microbiologics’ $7.25 million expansion will add 30,000 square feet of lab, production and office space. The project is expected to add 35 new jobs on top of 120 already in place. (In 2009, when Goskowicz became CEO, Microbiologics had 55.) The company’s continued growth reflects the St. Cloud region’s economic strength.

A fast-growing software company in Minneapolis? That would be Leadpages, which makes software to help business owners quickly create online “landing pages” to generate leads and sales. Founded in 2013, the company now has more than 150 employees, with co-founder Clay Collins at the helm. He has been the leading evangelist for Leadpages’ platform. Investors have been drawn to the ambitious CEO, his vision, his team and the product: The company raised $38 million in its first two rounds of financing. In July, Leadpages made its first acquisition, buying California-based Drip, a marketing automation company.

Though the Wild have not been able to move deep into the NHL playoffs, continuous sellouts and high fan interest demonstrate the strength of its brand. A coaching change which brought in veteran Bruce Boudreau indicates Craig Leipold is not content, given the conventional wisdom that most of the profits in the NHL are made in the playoffs). He is also looking for opportunities beyond the game. Expanding the Wild’s footprint beyond the Xcel Energy Center, Roy Wilkins Auditorium and Saint Paul RiverCentre (all of which are managed by a Leipold company), a Wild training center will be the anchor tenant of the $60 million planned redevelopment of the former Macy’s in downtown St. Paul.

Dan Knights, a 37-year-old assistant professor in the University of Minnesota’s computer science and engineering department, is garnering attention by combining two hot research fields—machine learning and medical inquiry—to look into how gut bacteria (the human microbiome) is connected to a range of diseases. His expertise as a computational microbiologist landed him a designation as a McKnight Land-Grant Professor last year. In 2017, Knights will be leading a project to understand the role of gut microbes in irritable bowel syndrome, with a $1 million grant from the Minnesota Partnership for Biotechnology and Medical Genomics, a collaborative venture between the Mayo Clinic, U of M and the state of Minnesota.

David Arvig has helped grow Arvig Enterprises into one of the largest independent telecommunications and broadband providers in the nation, leading the company through 17 acquisitions since he became COO in 2001. In August, Arvig acquired AGL Consulting, increasing the company’s metro fiber footprint from nearly 600 route miles to more than 800—a third of its total network in Minnesota. And while Arvig has been active in the metro, its background is in rural parts of the state, with plans to add another $350 million of fiber in greater Minnesota over the next 10 years.

In his 28 years with Paul Bunyan, Gary Johnson has worked his way from computer programmer to CEO, a position he has held since 2012. In 2014, Johnson announced the cooperative’s debut of GigaZone, one of the nation’s largest gigabit networks, offering data speeds up to 1G per second. Bunyan has already upgraded all of the school districts it serves to its GigaZone speed, including cities such as Red Lake, Bemidji and Grand Rapids. The cooperative will continue expanding its 1G across a 5,000-square-mile rural service area, providing broadband services to unserved rural areas.

Jamie Anderson has navigated Emergent Networks’ strategic direction since 2003. Under his leadership, the firm has become the IT counselor for some of the region’s leading businesses and has posted more than 100 percent year-over-year growth since 2012, pulling in $23.9 million in 2015. Anderson managed the firm’s recent expansion into Rochester and Mankato, and is the driver behind its ranking on Inc.’s 2016 list of the 5,000 fastest-growing companies, expanding from seven employees in 2007 to 98 in 2016. This year Anderson, who one day will replace his father as CEO, also began offering his customers technical desk support 24/7 out of Emergent’s office—in Edina, not Mumbai.

Money manager Noel Rahn had no experience in renewable energy when he launched Edina-based Geronimo in 2005. Last year, his company won a state contract to develop Minnesota’s largest solar power installation, a $250 million project that will reach across 16 counties. (Known as Aurora, it is being built by Italian renewable energy powerhouse Enel Green Power SpA, a Geronimo investor.) Rahn launched Geronimo as a wind-power company, driven by his belief that landowners like himself weren’t being treated fairly by wind developers. Geronimo now has almost $2 billion worth of wind projects under construction in six Midwestern states. In 2013, Geronimo moved into solar, where it sees hot opportunities thanks to customer demand and low panel prices. The company is planning to add more than 3,000 megawatts to its portfolio in the coming year.

Pakou Hang, a naturalized American citizen born in a refugee camp in Thailand, leads the Hmong American Farmers Association (HAFA). She first learned about agriculture while picking cucumbers as a child in her family’s farming operation. After earning a bachelor’s degree from Yale and a master’s from the University of Minnesota, Hang is leveraging her analytical and organizing skills to boost the incomes of Hmong producers. HAFA farmers are marketing their produce to businesses, school districts, grocery stores and co-ops. By working together, Hang is helping them move beyond consumer farmers’ markets to increase sales per acre.

Founded by Richard Copeland, Thor Construction ranks as the largest minority-owned business in Minnesota and one of the largest African-American-owned construction companies in the U.S. Ravi Norman, promoted from CFO to CEO in 2009, brings a strong background in finance to Thor, where he has emerged as an inspiring leader. Thor plans to move its headquarters from Fridley to north Minneapolis, a corner of the city that has long faced challenges attracting business and employment. Earlier this year Norman told TCB, “We think this is an opportunity for us to lead with our dollars, time and actions, and not just with our words.”

Laws on the book since the Great Depression have kept unaccredited investors from providing money to local startups in exchange for equity. But that changed in Minnesota in June, thanks to legislation tirelessly pushed by Ryan Schildkraut and Zach Robins of MNvest, which “aims to provide wider, cheaper and faster access to funding for companies and entrepreneurs.” Small businesses can now list themselves on online portals—a format similar to Kickstarter—and raise as much as $10,000 per person, per offering. Now the question is: Will people take advantage of it?

In 2010, when Scott Fahrenkrug became aware of the painful dehorning procedure dairy cows endure, he took action. But rather than start a petition, the professor at the University of Minnesota’s animal science department manipulated a cow embryo to create hornless cows. His success in manipulating their DNA pushed him to found Recombinetics, a St. Paul gene editing company that is making goats meatier and pigs more disease-resistant. In a fall 2015 feature on Fahrenkrug, Mother Jones said, “This scientist might end animal cruelty.” And the potential of Recombinetics’ technology goes beyond livestock, as it moves into efforts to address human ailments.

The Northside Achievement Zone is focused on closing the educational achievement gap in north Minneapolis. NAZ’s strategy connects organizations with schools to work with families to provide an “ecosystem” of support for children to do better in school and ultimately graduate from high school ready to go to college. Samuels has drawn national attention for her leadership and the program’s payoffs. Analysis by Wilder Research shows increases in kindergarten readiness and reading proficiency. NAZ’s work is resonating and continues to draw strong support. In 2015 the Target Foundation and General Mills Foundation each pledged $3 million to NAZ over the next three years, a strong endorsement.

Thomas Boemer and Nick Rancone are the duo behind the phenomenally successful (and tiny) Southern restaurant on south Nicollet Avenue—arguably the first restaurateurs in memory to successfully bridge the Mason-Dixon line to bring authentic Southern fare to these parts. A year of great reviews and long lines has led to big-shouldered expansion plans for late 2016 and 2017: A doubling of space in the Minneapolis restaurant, a sibling on Selby Avenue in St. Paul, and anchor tenancy at Keg & Case Market—a redevelopment of the historic keg warehouse at St. Paul’s Schmidt Brewery. Right now, this is arguably the most ambitious restaurant team in the region.

Since taking over as CEO in 2014, Vicki Holt has kept two goals top of mind: a) Push the company's annual revenue to $1 billion; and b) outrun her competitors. The second goal is firmly in hand for this e-commerce digital manufacturer of custom prototypes and low- to mid-volume production parts—but pushing revenue to $1 billion will not be easy in an industry where engineers and product developers like to handle a manufacturer’s work before opening their wallets. If anyone can do it, though, Holt can. Since 2015, Proto Labs has posted year-over-year revenue growth near 25 percent, and Holt believes her company can grow 20 percent year over year going forward.