The current chairman of the board at Ryan Cos., as well as its former CEO and president
April 01, 2020 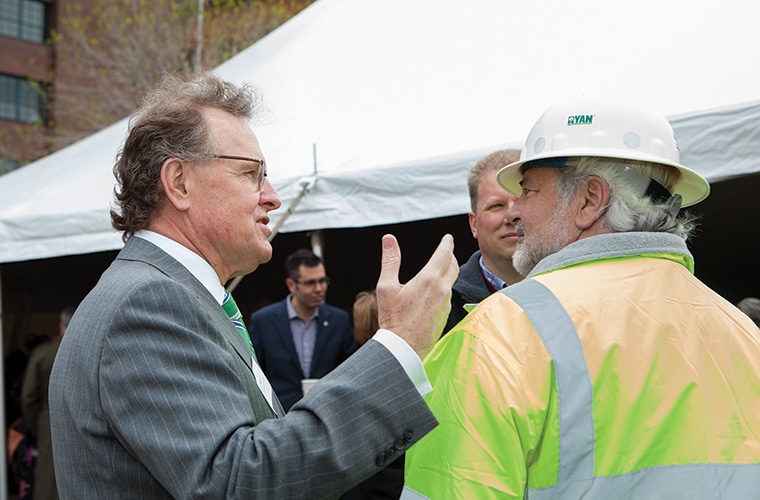 Ryan Cos. is a family business, but Pat Ryan—chairman of the board after serving a decade as CEO and president—didn’t grow up in the company. But he did grow up in Hibbing, where Ryan Cos. was founded 80 years ago by his grandfather, James Henry Ryan.

“I wasn’t born into the construction world,” Ryan says. His father, who was the youngest brother, went into insurance and the estate planning business.

After he graduated college, Pat Ryan landed a job as a broker leasing office space, which he did for seven years. “During that period, I started doing some work with Ryan [Cos.], representing them,” Ryan recalls. “That’s really where I got to know my cousin Jim.”

Jim Ryan invited Pat Ryan to join the company; he signed on in 1983 as vice president of development. The company was still relatively small, with annual revenue of about $20 million, almost entirely driven by construction. Development, Ryan recalls, was “an afterthought.”

Today Ryan Cos. is among the largest developers in the Twin Cities; the company has revenue of $1.7 billion, with 15 offices across the U.S. The company’s business model is to generate half of its revenue from construction and the other half from development. It was chosen in June for a high-profile project—developing the former Ford plant site in St. Paul.

Pat Ryan stepped into the company’s top job at a tumultuous and painful time: CEO Jim Ryan was diagnosed with cancer in 2008 and died in 2009. The recession hit the commercial real estate industry hard. Development work evaporated, and many developers filed for bankruptcy.

“It was miserable,” Ryan says, “Within about a year, our revenues dropped 50 percent.” But the company survived thanks to its construction business, with some corporate clients who continued to build projects. Ryan says that he had to cut about 150 jobs, and the company’s revenue was down to $350 million a year at its low point.

Ryan and company leaders huddled to strategize about how to “reconstruct” the company. One of the key decisions was to focus on specific property types—senior housing, health care, retail, industrial, large corporate build-to-suit offices—with the idea that specialization would drive more business. Today, Ryan says that those five property classifications account for 80 percent of the company’s revenue.

Veteran real estate developer Rick Collins joined Ryan Cos. in 1999. After leading some of the company’s largest development projects such as Midtown Exchange and Downtown East in Minneapolis, Collins was promoted in 2014 to regional president in the company’s Phoenix office.

Collins says he has learned many lessons from Ryan:

Community work is also important to Ryan. He’s the chair for the board of trustees at St. Paul-based University of St. Thomas, where he earned an undergraduate degree in finance. He joined the board in 2012 and became chair two years ago.

“The overwhelming trait is Pat’s drive for excellence,” says Julie Sullivan, president of St. Thomas. “He’s a very good chair from that perspective. He pushes me as a leader, but in a positive way. He asks really good questions, he’s creative when I talk to him about issues or problems.”

Sullivan says that Ryan’s profile in the local business community is an asset for St. Thomas.

“Pat is very, very well known by the business leaders in our community, but also by the nonprofit leaders, particularly in the health care and education sectors,” Sullivan says.

In May, Ryan announced plans to step down as CEO. Under new CEO Brian Murray, the move marks the first time in eight decades that the company is led by someone not named Ryan. But it’s still a family business. Pat’s son Mike was promoted last year to a senior vice president. And Pat Ryan remains board chairman.

“This is freeing me up to really do laser focus on a couple of areas in the company. I can go narrow and deep,” says Ryan, who adds that he will zero in on development and capital formation. “I’m really looking forward to that.”