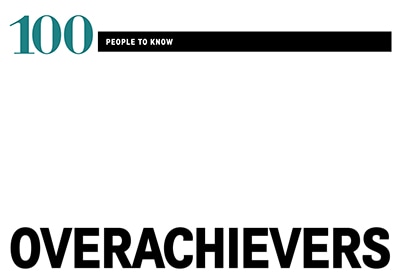 Entering his 11th year as St. Paul mayor in 2017, Chris Coleman will be emphasizing four priorities—closing the education achievement gap, promoting environmental sustainability, achieving racial equity and expanding the private sector. The Green Line light rail corridor and CHS Field have attracted more Twin Cities residents to St. Paul, and Coleman hopes the stream of visitors will increase with construction of a Major League Soccer stadium in the Midway. During 2017, watch whether Coleman decides to run for governor. He’s 55, finishing his third mayoral term, and Mark Dayton isn’t running again, so there’s a good chance Coleman will seek the DFL endorsement.

Gary Cunningham was tapped to lead MEDA in 2014. He brings deep experience in foundation work and public service to MEDA, which consults with and helps secure financing for minority-owned businesses across the state. (Cunningham also serves on the Metropolitan Council.) Under Cunningham, MEDA is doing stellar work. In 2015 MEDA provided consulting to 514 minority entrepreneurs, assisted with 20 business starts or acquisitions, and financed 59 new loans that secured $20.7 million in financing. In September MEDA was honored by the U.S. Department of Commerce’s Minority Business Development Agency as the best-performing MBDA Business Center in the U.S. (There are 44 across the country.)

Minneapolis-based Tactile Systems, also known as Tactile Medical, is in a class by itself: The company’s IPO in late July marks the only Minnesota IPO of 2016. The company produces medical devices that can be used to treat chronic conditions at home. Gerald Mattys, who has been CEO since 2005, brings a deep background in the med-tech industry to Tactile, and has been piloting the company to strong growth. Tactile’s revenue increased 32 percent in 2015, to $62.9 million. In the company’s second quarter, Tactile posted a 34 percent increase in revenue. Under Mattys, Tactile is clearly a company to watch.

Already the point man for the Mayo Clinic’s spin-off incubator and licensure of its intellectual property to outside health care companies, Jim Rogers in 2016 widened his portfolio to include a leadership position at the Center for Regenerative Medicine, one of Mayo’s most commercially promising research clusters. The science of growing new tissue from stem cells, thus reducing the need for transplanted organs, is expected to be a major focus in 2017, as Mayo begins the build-out of its Destination Medical Center. Mayo plans to turn Rochester into a biotech business hotbed, and Rogers promises to be in the middle of it.

Jeff McCaulley of Smiths Medical is taking on a higher profile in the Twin Cities’ medical device community—last year he was named one of 10 new directors of the Medical Alley association trade group. His new visibility also includes oversight of the British-owned firm’s headquarters relocation from a nondescript building in Arden Hills to an eye-catching new facility in Plymouth—an effort that garnered $877,000 in state support. The payoff for taxpayers is that McCaulley is ramping up R&D activities for the drug infusion pump-maker and promises to create 162 new jobs paying at least $45 per hour in 2017 and the coming years.

Most shopping malls around the United States face falling foot traffic and are looking for creative uses for their empty spaces. That’s hardly an issue for Mall of America, which is instead looking to nearly double in size and add amenities like new hotels, event space, major anchor stores and boutique shops. That’s a tall order for anyone, but Jill Renslow knows the mall like the back of her hand: She’s been with MOA since graduating from college 18 years ago.

A former banker, Kate Barr long has been a leader in Minnesota’s large nonprofit sector, joining the Nonprofits Assistance Fund (NAF) in 2000. Her organization helps nonprofits that want to make the world a better place, but need guidance or a loan to strengthen their financial operations. In fiscal 2015, NAF made loans exceeding $16 million to nonprofits. In 2017, Barr’s leadership role will become even more important because she will control a much larger organization: MAP for Nonprofits, which offers training, accounting and other services to nonprofits, will be merged into Barr’s NAF. The two organizations employ 28 combined.

In conjunction with MIA’s centenary last year, Feldman facilitated the loan of paintings by some of the 19th century’s A-listers, including van Gogh and Renoir. Even works by Leonardo da Vinci made it (thanks to a loan agreement arranged with Bill Gates). The extensive centennial celebration resulted in the museum’s best attendance ever, and Feldman is looking to continue traffic growth into 2017. Part of that plan involves bringing MIA further into the new century with multimedia experiences and mobile apps that MIA says will allow visitors to “create shared art experiences in unprecedented ways.”

Minneapolis-based Capella University was once a pioneer of online higher education. Kevin Gilligan arrived as CEO in 2009, bringing zero experience in the education industry. But when the recession brought declines in enrollment and revenue, Gilligan had exactly what the company needed: a new course. This year Capella acquired two tech “boot camps” offering non-degree, in-person programs. It also unveiled RightSkill, a partnership with online job site CareerBuilder, providing non-degree programs that can be completed in 90 days. As Capella adapts to meet a changing market, it’s once again a pioneer.

Lee Krueger begins his first full year directing the St. Paul Port Authority in 2017. Krueger was promoted to his new post after serving as a senior vice president of real estate and development at the Port Authority. While the port leases space for four river terminals, Krueger will be in the spotlight because of high-profile projects within the city. In September, the PA took steps to create a development district for shopping center parcels next to the planned soccer stadium near Snelling and University. He’s now working with Hempel Cos. to redevelop the former downtown Macy’s, which will include spaces for Walgreens and the Minnesota Wild.

In a region cleaved in two, Matt Kramer fights fiercely for the East Metro. The former salesman, chief of staff for Tim Pawlenty and executive at the University of Minnesota now advocates for the more than 1,200 members of the Saint Paul Area Chamber of Commerce, an organization he helped rebuild when it was near financial ruin in 2010. He complained in an op-ed last year that the East Metro was getting the West Metro’s transportation funding “crumbs,” so expect to see him rolling up his sleeves if a transportation bill gets traction in 2017.

Any medical device company that lands venture financing in the current risk-averse climate has something to brag about. Given that, Nadim Yared of CVRx Inc. may be the king of the hill among start-up med-tech CEOs, after obtaining $113 million in debt and equity financing to support a Phase III clinical trial and commercialization of its Barostim NEO device—one of the nation’s biggest med-tech financings of 2016. Efforts to battle chronic heart failure with nerve stimulation devices, however, have a checkered past, and in the coming months investors will be focused on the results of a pivotal clinical trial for Barostim called BeAT-HF (short for baroreflex activation therapy for heart failure).

A first-generation college graduate from Dickinson, N.D., ReBecca Koenig Roloff was inaugurated as the 11th president of St. Catherine University in October. She did not take a conventional academic route. Rather, she spent three decades building a business career with Cargill, Pillsbury and American Express Financial Advisors. Roloff holds an MBA with distinction from Harvard Business School and deployed her business savvy leading the Minneapolis YWCA from 2005 until this past summer. One of the most connected people in the nonprofit and business worlds, she’s now responsible for marshaling financial resources to support St. Kate’s success on a crowded higher education landscape.

Todd Berg is nothing if not determined: The veteran medical device executive founded Torax Medical in 2002 with backing from Mayo Clinic and has been patiently guiding its “magnetic sphincter” devices for treating gastroesophageal reflux disease (GERD) and fecal incontinence through five rounds of financing, clinical trials and long battles for coverage from insurers. 2017 could be a pivotal year for Berg’s company, after a clinical team at Mayo’s Florida campus became the first to successfully implant Torax’s FENIX Continence Restoration System in patients. A $25 million Series E financing led by Johnson & Johnson in August is meant to fund the long-awaited commercial scale-up of both FENIX and the LINX Reflux Management System for GERD.