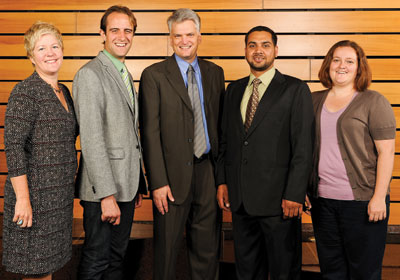 Many Americans have a love/hate relationship with their cars—they enjoy the convenience of being able to go where they want when they want but dislike the cost, maintenance, and environmental impact. Since 2005, local residents have been able to ditch their vehicles but still have access to one through HOURCAR, a service of the Neighborhood Energy Connection (NEC) in St. Paul.

By joining HOURCAR for a one-time, $50 fee, drivers 18 and older can rent one of 32 cars parked at hubs throughout Minneapolis and St. Paul. When members need a vehicle, they can reserve it 24 hours a day, online or by phone. Then that car is theirs for running errands, visiting the doctor, or going on outings to see family or friends.

Members usually save about $4,000 annually. According to NEC Executive Director Chris Duffrin, the average car owner spends as much as $7,000 a year, including depreciation, insurance, gas, maintenance, and fixing any damage. Renting through HOURCAR costs either $5 a month and $8 an hour or $15 a month and $6 an hour, depending on the member’s plan, plus 25 cents a mile for gas. Even if users buy a transit pass or occasionally rent a car, too, they still come out ahead, Duffrin says.

“Our basic premise is that for people who can take transit or bike or walk for their daily commute, sharing a car is more cost-effective than owning a car,” notes Duffrin. “The average car is used between one and two hours a day, and the vast majority of the time it’s just sitting there depreciating in your driveway. If we can take the cost and spread it over a big group of people, you can save a lot of money.”

The NEC has found that members eventually use the cars with less frequency as they get used to relying more on mass transit, biking, and walking. “They realize they don’t need the car as much as they thought they did, and they use us for only a few trips each month,” Duffrin says.

Membership has grown steadily from 125 in 2005 to 1,560 today. HOURCAR adds cars as its membership increases, and its leaders expect to bring on 14 more in the next two years. The program’s now 29 hubs will also grow to 75 within five years.

Initially, the NEC relied on grants and sponsorships to get HOURCAR up and running. Now the program is break-even, making it easier to fuel further expansion of cars and hubs. HOURCAR brought in $436,000 in revenue for its 2011 fiscal year and is projecting revenue of $630,000 next year.

The NEC is no stranger to entrepreneurship, opening in 1985 with the mission to offer tools for energy-efficient living. The nonprofit first focused on residential energy audits and started a recycling program in St. Paul, which it later spun off as Eureka Recycling. The NEC has grown HOURCAR through methods like word-of-mouth and highly localized marketing, targeting neighborhoods where hubs are located.

It’s gratifying to Duffrin and the NEC that HOURCAR helps people drive less and benefits the environment in the process.

“Attitudes toward car ownership are really changing, and car sharing has a lot to do with that,” he says. “It’s exciting that people come back to us and say, ‘I walk more now; I’m happier. I love this service because I don’t have to worry.’ They also like that they are saving a lot of money.”