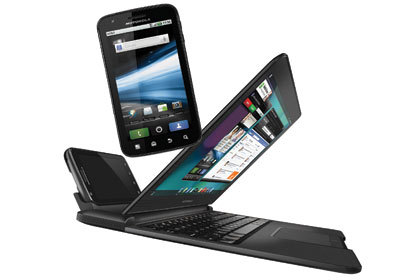 As we prepared this guide, Apple released the iPhone 4S. It offers a few improvements on the iPhone 4, but we thought we’d spotlight a compelling iPhone alternative: Motorola’s Atrix 4G. You’ve probably heard smartphones described as tiny pocket computers. The Atrix 4G takes that concept to its literal extreme: An accessory transforms the phone into a netbook-like computer. The laptop dock consists of an 11.5-inch screen and full-sized keyboard that draws its computing power from the phone when it’s attached to the device. The unique design helped the Atrix 4G win the Best of CES award in the smartphone category at last January’s consumer electronics trade show. The phone packs a dual-core processor, making it one of the fastest Android phones. It’s nearly as thin as the iPhone 4 and features a 4-inch quarter HD display, as well as a front-facing camera for use with videoconferencing. A Citrix app lets users access their virtual desktop. The laptop accessory adds about $300 to the phone’s price. Without spending some time with it, it’s hard to say whether it’d be an expensive novelty item or a genuinely useful add-on.

We know some of you prefer to peck on a physical keyboard, and for you we suggest the Samsung Epic 4G. The Sprint phone slides open to reveal a QWERTY keyboard, which has been praised by reviewers for having well spaced keys and “good clickiness.” (It even includes a dedicated smiley face key.) The wide, horizontal layout means one-handed typing isn’t possible, so some BlackBerry lovers might not be satisfied if they’re used to one thumb doing all the work. It’s a fast phone, one of the first for Sprint’s new 4G network. Other features include a front-facing camera for use with videoconferencing apps and Samsung’s social media aggregator, called Social Hub, which lets users monitor and maintain their Facebook, Twitter, and MySpace accounts in one place. Still, the keyboard will be the selling point for many. “The Epic 4G will live or die on the strength of its keyboard,” says a PCMag.com reviewer. “I’m happy to say it will live.”