Mike "Chairman Of The Board" Opat 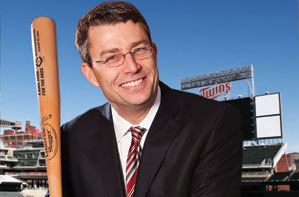 The Twins call him the most courageous politician involved in the 10-year-long public debate to get Target Field built. He credits his colleagues on the Hennepin County Board and state legislative leaders. But Hennepin County Commissioner Mike Opat’s determination to advance the ballpark’s cause in the face of persistent and principled opposition earns him a spot on the Target Field Starting Nine.

Opat says that one of the first key moments in the efforts that made Target Field a reality came in 2002, three years after voters in St. Paul rejected an effort by then-Mayor Norm Coleman to pass a municipal sales tax to lure the Twins to the capital city.

“There was the recognition then that if the state wasn’t going to lead on the public side, no local unit of government besides us was large enough to have the sufficient financial strength to do it,” Opat recalls. “That decision wasn’t received well by some at the Capitol who didn’t want the county to get into it. But I looked around the country at other stadiums, and usually it was the counties or cities who were getting them built.”

Another important moment, he says, came in 2004, when he and the other commissioners decided to drop plans for a patchwork of stadium funding sources—such as taxes on hotels and surcharges on tickets—and go with “a straightforward, broad-based [0.15 percent] sales tax. It was very controversial, and the other [pro-stadium] commissioners [Mark Stenglein, Randy Johnson, and Peter McLaughlin] could have walked away at any time. But they didn’t.”

The last hurdle was overcome in 2007, Opat says, when the team’s owners, the Pohlad family, agreed to ante up an additional $15 million to fund infrastructure improvements needed for the stadium that weren’t included in the amount budgeted for the project.