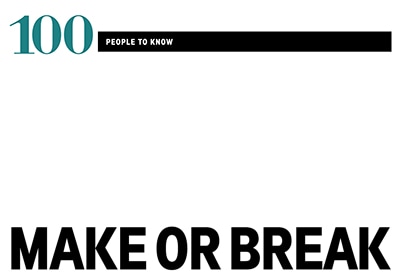 With two years apparently remaining in his tenure (likely sunsetting with the end of Gov. Mark Dayton’s term), Adam Duininck leads an increasingly activist and divisive regional planning body in a metropolis where issues of local control burn as hot as the ideological passions that feed them. The council’s recent decision to force-fund Southwest Light Rail against the Legislature’s recalcitrance drew an unprecedented line in the sand, though issues of housing development and water rights are prominent, too. Much is riding on the 2016 election (results not available at press time). Under DFL legislative control, Duininck’s influence will rise; under divided government, calls for neutering and reorganizing the council will continue.

Allison O’Toole was promoted from interim to permanent CEO of the MNsure health insurance exchange in November 2015, with the expectation that she could hit the ground running as the exchange struggled with myriad challenges. She’ll be kept plenty busy in the coming year dealing with the loss of Blue Cross Blue Shield from MNsure’s individual policy market and a round of shockingly high premium hikes from the remaining vendors, which prompted Gov. Mark Dayton in October to call the situation a “serious problem” and ponder calling a special legislative session to seek solutions as MNsure’s condition has evolved from serious to critical.

Succeeding the genial and outgoing R.T. Rybak in a booming economy, it was conjectured that Betsy Hodges was in for a smooth first term. But as the reserved and diffident mayor prepares for reelection next November, she is defined either as an embattled and insufficiently liberal figure to the racial equity and economic justice crowds that have besieged her office over questionable policing and labor mandates; or as an overzealous liberal pol to the city’s small business community, which resents her unenthusiastic advocacy for the city’s business climate. She will likely face challenges from both her left and right flanks within the DFL.

Since Brian Cornell became Target’s chairman and CEO in August 2014, its stock has risen 17 percent (through Oct. 28), slightly better than market average. But this was due to cost cuts and billions of dollars in stock buybacks: Factor in 59 million shares no longer on the market today, and Target’s stock price would be up only 5 percent. Revenue, meanwhile, is slipping; first-half 2016 revenue was slightly below that of 2014. Given more aggressive growth tactics deployed by competitors Walmart and Amazon, will Cornell deliver a more robust growth strategy in 2017?

Former Monsanto executive Carl Casale remains under immense pressure. As part of an $80 million settlement with the SEC, Casale—who was exonerated of allegations he misled Monsanto shareholders about Roundup profits—voluntarily repaid $728,843 in bonuses that he received while serving as the chemical company’s CFO. Now at CHS, the country’s largest farmer-owned cooperative, Casale oversaw year-over-year net income that plunged 34 percent in the first nine months of FY 2016, after dropping 28 percent in 2015. The coming year won’t be much easier, given a worldwide commodity slump, but Casale is offering members Pro Advantage, a grain-marketing and hedging system to diversify sales and reduce crop price risk.

Dr. Bill McGuire, former CEO of UnitedHealth Group, is anticipating a pivotal first year for his Major League Soccer franchise. While the Minnesota United FC is expected to play in TCF Bank stadium in 2017, McGuire is eager to break ground on the team’s stadium in St. Paul’s Midway neighborhood. In recent weeks, it has been unclear when work will begin on the $150 million stadium project, since Gov. Mark Dayton vetoed the 2016 tax bill with the team’s property and sales tax exemptions. It may be that McGuire waits until the 2017 legislative session, putting a 2018 season in St. Paul out of reach.

Hired this summer, Ed Graff is the latest in a line of leaders to be tapped by a fractious school board to lead a troubled district. Charged with mitigating the effects of a micromanaging board, student poverty, family breakdown, an inflexible contract with teachers and vociferous complaints about student equity, Graff has his work cut out for him in an office that tends to consume its occupant in 24 to 36 months. By year’s end the community will be looking for a sense that he can be effective where his predecessors were not.

There was cautious rejoicing in Blue Shirt Nation, and throughout the Minnesota business community, when the Richfield-based electronics superstore announced that its first quarter 2016 revenue and profits were better than expected. Was this the sign that the company’s turnaround was permanent? Joly has been credited with skilled cost-cutting and bringing Best Buy back from the cliff that had claimed Circuit City and other competitors. Analysts worry that there’s little growth potential for the company. Still, second quarter results were upbeat, and the holiday season looked promising in late November. Will Joly still be jolly in 2017?

Julie Sullivan, the first female president of a Catholic college that was male-only until 1977, recently rolled out an aggressive $300 million, 10-year expansion plan for UST’s St. Paul campus. In addition to two new academic buildings, the plan includes 631 more parking stalls and 437 additional beds on campus, in an effort to prevent the university from overflowing into the neighborhood—a longstanding issue. Sullivan, who holds open office hours, will have a lot of listening to do in 2017 if her expansion plan is to pass muster with neighborhood groups.

Imagine waking up to hear that what your company has been making for more than 100 years is now considered unhealthy. That’s what it’s been like for General Mills’ Ken Powell. Analysts applaud cost cuts, efficiency improvements and revenue growth due to changes to its breakfast cereal sales and investments in organics. Now his challenge is to reenergize Yoplait yogurt, which has lost ground to newer Greek-style yogurts. Even so, General Mills’ stock continues to keep pace with, if not outperform, many others.

Kurt Daudt’s rise to the upper echelons of Minnesota politics is nothing short of meteoric. First elected to the state House of Representatives in 2010, he was an architect of the GOP’s electoral majority in that chamber in 2014—a move that resulted in his elevation to the speakership. He’s steadfast in his conservative beliefs (see his opposition to tax hikes) and is a primary antagonist of Gov. Mark Dayton and DFL leadership (see his willingness to scuttle major legislative bills that included funding for Southwest LRT). Regardless of the party makeup of the 2017 Legislature, Daudt will no doubt play a critical role addressing policies that affect business, including a long-term transportation package and bonding bill.

Laurenco Goncalves’ business is based in Ohio, not Minnesota. But he’s a frequent visitor to the state, thanks to Cliffs’ longtime taconite-mining operations. It’s been a tough few years for Minnesota’s iron-mining industry; a global steel glut has been the chief culprit. But there’s another problem: The Range’s traditional taconite pellets were designed for old-school mills and don’t work in modern electric-arc steel furnaces. Goncalves sees an opportunity to produce direct reduced iron (DRI) pellets, which fuel electric-arc furnaces, at the bankrupt Essar Steel facility in Nashwauk. But Essar isn’t giving up. Will Cliffs get the chance to open a DRI plant? The Range’s long-term viability could be at stake.

When Gross took over in February 2016—becoming Supervalu’s fourth CEO this decade—he inherited a company in a pickle. Keeping up with America’s ever-shifting grocery expectations has proven to be a struggle for the Eden Prairie-based distributor/retailer, as many of its retail channels, such as Cub Foods, are seeing declines in both customer visits and average basket sizes. As a turnaround effort, Gross is implementing a plan that includes more promotions and store upgrades. If it doesn’t pan out, observers expect sales of individual store brands or Supervalu’s entire retail business.

An April 2016 report from state Legislative Auditor James Nobles was merciless: The Eveleth-based IRRRB needs much better oversight, and its board structure might not even be constitutional. The IRRRB is primarily funded by a production tax that taconite companies pay in lieu of property taxes. Its mandate is to help the Range economically diversify beyond mining. It has an annual budget of about $40 million to make various loans, equity investments and grants. But some big bets—Ironbound, a film-production facility in Chisholm, or the Essar Steel plant in Nashwauk—haven’t panned out. Then there’s Giants Ridge golf and ski resort in Biwabik: The IRRRB has subsidized annual losses averaging nearly $2 million for almost a decade. The Legislature has made threatening noises about reform. Whether those threats are carried out, Mark Phillips (who became commissioner in 2015) and his board have their work cut out for them.

Maureen Bausch will be at center stage in 2017 as she leads the effort to get the Twin Cities ready to host Super Bowl LII on February 4, 2018. Her work extends beyond providing a good gameday experience at U.S. Bank Stadium; she’s also responsible for planning and executing a full week of activities that precede the big game. Committee co-chairs Doug Baker, Richard Davis and Marilyn Carlson Nelson selected Bausch for this post in 2014 based on her work at Mall of America. She joined MOA in 1990 and rose to executive vice president. Now she’s using her branding and marketing savvy to leave a lasting impression long after the game is over.

Allina CEO Penny Wheeler saw her leadership of the health care nonprofit put to a severe test this year when she threw down the gauntlet over replacing costly union-backed health insurance plans for 4,800 of the provider’s nurses. It provoked a 37-day strike that ended with a new contract, under which the nurses will be very gradually moved to company-endorsed plans. But the deal came only after the intervention of Gov. Mark Dayton and bitter union criticism of Wheeler’s lack of personal participation in the negotiations. The coming year will be one in which the CEO will face continuing challenges in managing the evolving health care landscape while attempting to maintain high ratings for its facilities (Abbott Northwestern Hospital was again ranked No. 1 in the state by U.S. News).

Sally Smith has grown Buffalo Wild Wings from about 70 restaurants to more than 1,180 over 20 years, but next year could be her most challenging, due to slowing restaurant traffic, a persistent global commodity slump that has deflated grocery store prices, and activist investor Marcato Capital Management’s new 5.1 percent stake in the company. Marcato is pushing the firm to franchise more of its stores and find new leadership. Despite these challenges, Smith is on track to open 40 new corporate-owned stores in 2016 and is adding India and Vietnam to its growing list of markets this year.

Low fuel prices have brightened Sun Country’s horizons since Zarir Erani took over the carrier in 2015, but its competitive situation has grown fierce. Lower-operating-cost carriers Spirit and Southwest Airlines continue to add flights at MSP, while Delta Air Lines has implemented a tier of no-frills fares designed to lure passengers from value-driven carriers. If fuel prices head up in 2017 as expected, Erani will have to adroitly manage fixed costs and fares to stay out of serious turbulence.