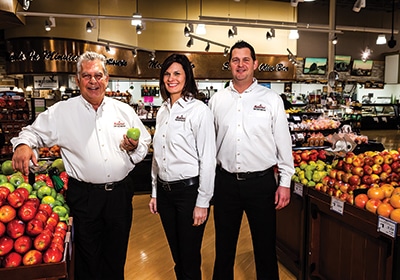 After more than a century of operating a single store, Waconia’s Mackenthun’s Fine Foods became a chain last fall when it acquired Fred’s Market Place Stores in Montgomery and Lonsdale. “They were family-owned stores, and unfortunately the person who owned them didn’t have kids” and was retiring, CEO Kim Mackenthun says.

But Mackenthun has kids, and they’re likely to perpetuate his own family’s supermarkets. “The grocery business is a little piece of DNA in this family,” he says. And that might well be the secret of its durability, even with the presence of many much larger chains.

Mackenthun’s has served the Waconia community for more than a century.

His great-grandfather August Mackenthun began selling homemade sausages around the turn of the last century. (The family isn’t certain of the specific year.) “How did you start a grocery store back in 1900? You needed to make sausage, so my great-grandfather started making it for friends and neighbors, and it grew,” Mackenthun says. “When I first got into the business, we were still slaughtering cattle and hogs.”

Kim Mackenthun began working in the store as a kid, bagging potatoes and separating pop bottles. At college, “I thought a little bit about being a veterinarian,” he says. “But once I got into chemistry and all that, I changed my mind.”

Since becoming CEO in 1976, Mackenthun has kept the family business fresh by updating its offerings.

His store—which has a full-time dietitian—provides abundant choices for those on specialty diets, along with extensive natural foods sections. “We focus on celiac disease, heart health, diabetes,” says his daughter, Jessa Theis.

And he’s retained certain qualities customers have come to appreciate over the decades: Many items in the stores’ bakeries are made from scratch. The deli offers a variety of fresh, ready-to-eat foods. And the meat department’s eight full-time butchers cut the steaks and roasts, grind the beef and offer 50 different kinds of brats and a 12-foot selection of summer sausage, beef sticks and jerky, using the smokehouse at the back of the store.

Mackenthun’s has also long been a booster for the community of Waconia. It is a major financial contributor to a new grandstand being built by the Waconia Baseball Association and to the heart wing at Ridgeview Medical Center. For more than a decade, Mackenthun’s has sponsored an annual pre-holiday “stuff-a-truck” food drive for the Waconia United Food Shelf. It also donates turkeys for Thanksgiving meals and sponsors a yearly golf tournament that has raised $65,000 for the food shelf since 2009. “They just can’t do enough for us,” says Marty Cramer, the food shelf’s executive director. “They’ll bend over backward for us.”

The community focus is one of the key reasons Mackenthun’s customers have remained loyal, even with Target moving into town in 2008.

“My dad and grandfather knew this before us: If the community is good to you, you have to be good back,” Mackenthun says. “We’ve been blessed to have a successful business. We try to make sure everyone else in the community is going to do well, too.”

With the addition of stores in Montgomery and Lonsdale, now those communities are going to get a taste of what Mackenthun’s has been serving for more than 100 years.

If you want the scoop about what’s going on in Waconia, just stop by Mackenthun’s Fine Foods, where you can grab dinner, tickets to the rodeo and information on where the high school marching band will be performing.

“I always thought it was kind of funny, back when I was young and cashiering and answering the phone, that we were always used as the information hub of the town,” says Jessa Theis, a fifth-generation member of the Mackenthun family. “They’d call the store and ask what was going on in the community, like we were supposed to know everything. The thing is, we do know the pulse of what’s happening. That’s how involved we are: We have a pretty good idea and can share it with customers.”