What’s a “Best of Business” (BOB) edition without a local beer roundup? And there’s plenty to round up this year.
April 01, 2020 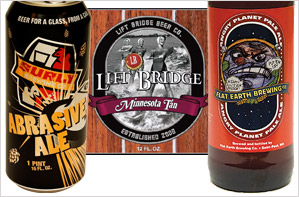 The big breweries left the Twin Cities long ago. But small ones have been blossoming like Zatec hops in rural Czech springtime. Inspired, in part, by the grand-dad of local start-up sudsmeisters, St. Paul’s Summit Brewing—whose flagship Extra Pale Ale won a gold this year at the 2010 Brewers Association World Beer Cup—these newcomers are building one of the most effervescent beer scenes in the country.

• Surly Brewing, founded in 2004, has become one of the most highly regarded small brewers in the country, though high local demand has made it hard for Surly to expand outside its local base. Its annual bottled “special” for 2010, a milk stout brewed with coffee, became BOB’s most beloved local brew of the year. Alas, it may never reappear, living on only as a beautiful, ghostly memory. Unless founder Omar Ansari takes this subtle hint.

• Fulton Beer is a Minneapolis-based company opened up last year. It’s contracting out the brewing in Wisconsin for now. We expect not for long—nearly every self-respecting beer-centric tavern in the metro has Fulton’s stylish India pale ale Sweet Child o’ Vine among its taps.

• 612 Brew. Another newbie looking to open its own brewery in Minneapolis sometime this year.

Meanwhile, the City of Minneapolis just made a change in its ordinances that allows brewers to sell 64-ounce growlers on their premises—a good way to develop cash (and beer) flow. If the change helps microbrewers as much as they expect, the City of Lakes will be drenched in something other than H20. Can Minneapolis denizens consume that much local cerveza? Ein prosit, in any case.