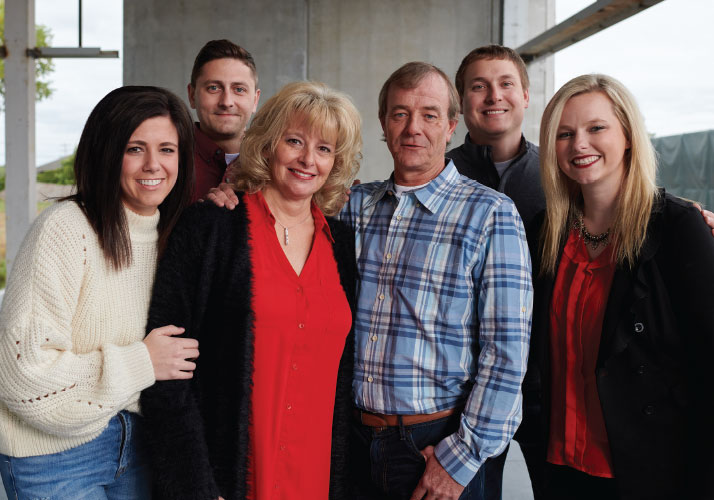 It’s a company that can never say no to new opportunities.
By webpublisherpro
| April 01, 2020
Acceptance SpeechProfile Video

The Lloyd family has built its company by tearing things down.

Though Savage–based Lloyd’s Construction Services is in the demolition business, it doesn’t use explosives and wrecking balls. In a sense, Lloyd’s reverse-engineers structures. This is demolition work that requires added care and labor. In 2006, when Mall of America’s Camp Snoopy became Nickelodeon Universe, the company took an 20,000-pound excavator through the doors of the mall to tear down the three-story Mystery Mine ride. It then moved that excavator under a rollercoaster without damaging the structure’s physical integrity or that of any surrounding structure.

The Lloyd family offers these tips for maintaining a peaceful family business.

Use outside business consultants
It helps take some of the pressure off. “We continue to do that because the most important thing is your family.”

Start conversations with “I,” not “you”
Start a conversation with “I feel” instead of lashing out or blaming. It’s quelled many an argument, John Lloyd says.

Be honest with yourself
You’re a member of the family no matter what, but you’re not always guaranteed to be the leader of the business. Accept your strengths and weaknesses.

This type of service, called selective demolition, wasn’t the Lloyd family business’ original line of work. But the company has grown by evolving. “We always want to focus on finding the new thing instead of jumping into what everyone’s doing,” founder John Lloyd says. Plus, he adds, he and his family simply never say no.

In 1983, Lloyd was 17 years old when his grandmother gave him and his older brother $1,000 each. Looking to make some cash after school and on weekends, the brothers pooled their funds to buy a 1952 GMC dump truck. Then they started a business hauling debris from construction sites. General contractors usually had to clear their own debris, so the pair set up temporary debris pens in new-construction neighborhoods.

John’s brother left just weeks in, but his father, Jim, bought his share so that the business could keep on trucking. After graduating from high school, John Lloyd worked for his company full-time. His mother, Merry, handled the bookkeeping.

The business changed in 1989, when a customer asked the Lloyds whether they offered selective demolition services—demolition that does not raze an entire structure. It’s a service not many companies offer because of its tedious and technical nature. It was new to the Lloyds, but they accepted the challenge. By 1995, the family business had discontinued its original construction-debris hauling service in favor of demolition work.

John’s wife Stephanie became involved in office-related tasks in 1987 and took over when Merry retired in 2000. “I don’t pay attention to details,” John Lloyd says. “I’ve been ‘Captain Chaos’ since day one.” He credits his wife, who is now the company’s president, for much of Lloyd’s Construction’s success.

In the late 1980s and early ’90s, the Lloyds’ office was John and Stephanie’s 600-square-foot house in Prior Lake. “Our daughters were babies, crying in the background as phones were being answered and orders were being taken,” Stephanie Lloyd recalls. Once the Lloyds got a “real office,” the girls spent all their free time after school and in the summers on-site—there was even a toy room. “When we were old enough, we’d clean a truck or file papers,” daughter Amanda recalls.

After the sisters graduated from the University of St. Thomas, Amanda took on the role of corporate secretary; her sister, Allie, became treasurer. When Amanda was dating Josh Barke in 2010, she suggested he take a part-time job at her family’s business. “We slowly sucked him in,” she says, laughing. Now Amanda’s husband, Josh, works full time overseeing field operations for the company. And when Tony Trulen, whom Allie later married, finished college in 2012, he too joined Lloyd’s. Tony is now its trucking operations and safety coordinator.

Now vice president, John Lloyd still works in the field—and prefers it that way. By working alongside his employees, he earns their respect in a hands-on way, Allie says. And as Jim Lloyd, who passed away earlier this year, always told his family, “No one works for you. You work with people.”

Lloyd’s Construction Services currently brings in around $20 million a year. Over the years, it has continued to add services as new opportunities have presented themselves. In 2000, it launched an excavation division and purchased equipment to handle larger demolitions. Lloyd’s also provides emergency response services at disaster sites, such as cleaning up debris and demolishing anything that has been too damaged to salvage. The company also helps fire investigations. Once the fire marshal has established that no foul play is involved, Lloyd’s digs (very carefully) through the building remains to help discover where the fire originated.

With the company continuing to grow, Lloyd’s is building a 14-acre headquarters in Shakopee to replace its current 5-acre space in Savage. As for succession, the Barkes’ three young kids are growing up as immersed in the business as Amanda and Allie were.

“Our oldest is obsessed,” Amanda says. “This is his dream life that he’s living. And even the girls know pieces of equipment by name.”