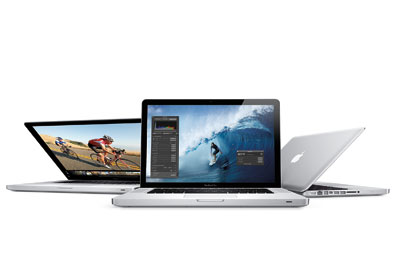 Apple’s new MacBook Pro is simply the fastest, prettiest, most powerful laptop available. The 2011 version looks the same as previous editions, but it includes big changes under the hood. The machines are among the first to use a new second-generation chipset from Intel. In performance tests by PCMag.com, the new MacBook Pros crushed the competition and all previous MacBooks. “Suffice it to say, it was a massacre,” a reviewer commented.

The built-in Webcam has been upgraded to high-definition and now works with Apple’s Facetime video calling app. The ports are familiar, with the exception of Apple’s new Thunderbolt connection, which is touted to be 21 times faster than USB 2.0 connections. The battery hasn’t changed, but the computer’s energy efficiency has improved, extending the life of a charge. The keyboard remains the same, with backlit keys and Apple’s smooth, responsive glass clickpad. At 5.5 pounds, it’s a pound lighter and a quarter-inch thinner than the nearest competition. The MacBook Pro is a good candidate for someone looking to replace a desktop. It’s also expensive, but if you can afford the investment you won’t find a better laptop.

If you’re looking for a computer with battery life to last the duration of a long flight, or maybe just a day at the coffee shop, this business ultraportable from Lenovo is your best bet. The ThinkPad X220 features “epic battery life,” in the words of a LaptopMag.com reviewer. The internal battery can last upwards of eight hours, and a $180 external battery “slice” gives it another six to eight hours. That’s about 15 hours without having to plug in.

The compact computer is the first ultraportable to run on Intel’s new second-generation Core (the same type that powers Apple’s MacBook Pro). That makes it the fastest performer in its class. Lenovo has upgraded to a 12.5 inch widescreen, allowing for a larger keyboard that reviewers praised as easy to use. The mouse buttons have been integrated into the touchpad, similar to Apple’s laptops. Lenovo has added VCA and DisplayPort outputs for easier audio and video presentations. The videoconferencing experience is improved with an HD Webcam and noise-canceling microphone meant to mute out keyboard clicks. It weighs just 3.3 pounds, but it also packs road-worthy durability, with a rubber-coated lid and metal hinges. The “all-too-familiar ThinkPad can deceive you with its boring business looks, but it’s arguably one of the best laptops we’ve ever tested,” Engadget.com wrote. Prices start around $980. Be sure not to disable your screensavers; some users have complained about ghosting issues with the LCD screen.