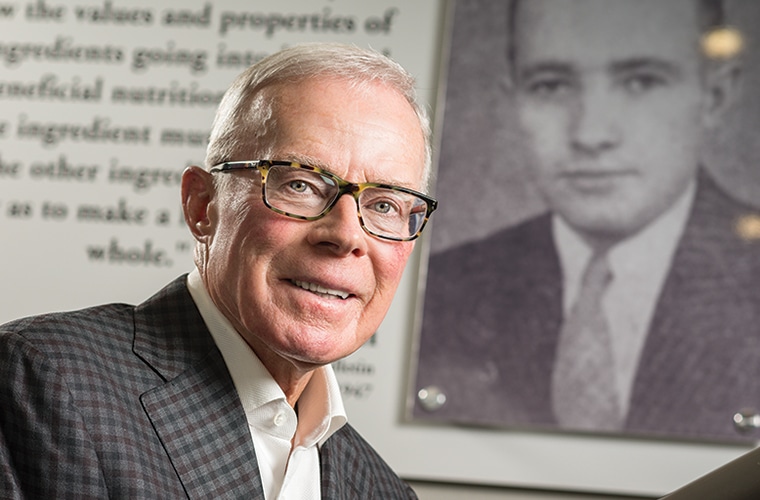 Located 180 miles northwest of the Twin Cities, Nelson’s hometown has an official 2010 population of 2,985, though hundreds of other folks live around the nearby lakes. Perham’s downtown has nary an empty storefront; it’s one of those towns that still has homegrown men’s and women’s clothing stores.

Among the tallest structures in town is a 135-foot tower with the word “Tuffy’s” prominently visible. While there are other industries in Perham (mostly ag-related), Tuffy’s is the big dog. It’s part of KLN Family Brands; at age 76, Kenny Nelson remains its CEO. He and his companies have thrived among industry monoliths, where smaller players have to claw out niches for themselves.

Nelson’s entrepreneurial journey began in 1964, when he and his father, Darrell (nicknamed “Tuffy”), launched their own brand of dog food, which they sold to regional pet stores and grocers. Within a few years, Tuffy’s was successful enough to catch the eye of the H.J. Heinz Co. The Pittsburgh-based consumer food giant acquired Tuffy’s in 1971, and Nelson went along for the ride.

But not for long. “I wanted to try something different,” he says. “I like the direct-sell business, where you go into a store and you present your products, you put them on the shelf, you make out the invoice, you get paid, and you jump into the truck and go to the next account. I’ve never been afraid of cold calls. I like meeting people. They might turn you down the first time. But then you think, ‘How am I going to sell this guy the next time I call on him?’ That intrigued me.”

Chips lent themselves to that approach. Back in the early 1970s, there were dozens of small regional potato chip makers, and Nelson believed he could become one of them. He named his new company Barrel O’ Fun.

For the first few years, the name seemed like an exercise in wishful thinking. Secondhand production equipment kept breaking down or improperly seasoning the chips. What’s more, “it was just an awful time to go into the potato chip business,” longtime friend Gary Spies, chairman of Service Food Markets and a KLN board member, recalls. “The price of potatoes was skyrocketing.” Nelson was burning through money, including what his father had invested.

Tuffy’s had its own share of growing pains: “The food was cheap,” Spies says, “but dogs didn’t like it.” The Nelsons changed the formula, and Tuffy’s became a hit. In Barrel O’ Fun’s fifth year, Nelson finally had a profitable month. He went to his banker and said, “‘Jack, we’ve finally turned the corner.’ He looks at me and says, ‘Kenny, one month doth not a year make.’

“That statement instilled in me a spirit that said, ‘You know what? I’m going to show this guy I can do it.’ ”

Thanks to hard work and strong salesmanship, he did; in 1981, his chip business attracted a larger buyer. In this case, it was Wisconsin-based G. Heileman Brewing Co., the now-defunct maker of Old Style and Special Export beers. After working with Heileman for several years, Nelson decided to launch another company. Once again, he staked out a place among the giants: Kenny’s Candy would distinguish itself in licorice.

In 1988, one year after he started Kenny’s Candy, a cash-strapped (and ultimately bankrupt) Heileman sold Barrel O’ Fun back to Nelson for cash. In addition to leading Barrel O’ Fun, Nelson put his selling skills in overdrive, landing contracts to produce house-brand salty snacks for major big-box retailers and smaller stores. At the same time, Kenny’s Candy was producing innumerable varieties of licorice, gummies, and other sweets for other companies to “re-bag” and sell to small supermarkets and convenience stores.

In 2001, Nelson bought back the Tuffy’s plant in Perham. By then, the plant and brand were owned by Tennessee-based Doane Pet Products, one of the country’s largest pet food manufacturers. Doane was looking to downsize, and Perham was on the chopping block.

Six years later, Doane was out of business. Meanwhile, the “new” Tuffy’s became, well, a player. “We’ve been able to garner a pretty good slice of the small independent retail operations, as opposed to PetSmart or Petco, the dominant players,” Nelson says of the niche he’s carved in the market. Tuffy’s now sells its products to about 6,000 regional independents, including Twin Cities-based Chuck and Don’s.

Nelson’s enterprises have attracted more than buyers. Bank of America courted him for several years, and in 2014 Nelson tapped it for funds to expand production. “Since [Nelson’s] businesses are smaller, that’s allowed him to be more nimble,” says Jeff Ware, a Chicago-based relationship manager who specializes in food and agribusiness companies in Bank of America’s commercial banking unit. “If a client of his has needed a certain type or specification of snack chip, he would be able to very quickly figure that out.” To meet the needs of major clients, Nelson expanded Barrel O’ Fun production to Arizona and Pennsylvania.

In addition, Ware says, Nelson “has extreme attention to costs.” Since many of his inputs are commodities, such as sugar and potatoes, his experience provides him with “a real sense of how to manage the business by understanding what those costs are going to be.”

By 2015, thanks to that experience, Nelson owned four solid companies (including Nutheads Chocolate Factory). When a new buyer asked about Barrel O’ Fun, he listened. Texas-based Frito-Lay now holds about two-thirds of the U.S. salty snack market, and only a few smaller firms remain. One of those is Ohio-based Shearer’s Foods, which had production facilities throughout the country, but not in KLN’s territories. The sale of Barrel allowed KLN to invest in its fast-growing pet-food business.

“One of the things we’ve always had going for us in all of our businesses is good ingredients right here near Perham,” Nelson says. These include sunflower and corn oil, sugar from the Red River Valley, peas from central Minnesota. What’s more, “our businesses have grown thanks to good, big families from this area,” Nelson says, adding, “these people know how to work, and they’re very clever, besides—fixing their equipment and their tractors and so on. They became machine operators for us.”

KLN also has tapped families who are relative newcomers to Perham. Nelson’s daughter, Tina Rasmussen, works for the company as a language instructor, helping KLN’s Spanish-speaking employees and their English-speaking colleagues learn how to communicate with each other.

While KLN is staying put in Perham, Nelson’s children are making sure that it doesn’t stay still. Son Charlie, now president of KLN Family Brands, and son-in-law Chase Rasmussen, Tuffy’s vice president of sales and marketing, are pursuing new markets and products. KLN is adding lines of high-end pet treats, as well as food with a higher meat content than is typically available.

Gary Spies points to Tuffy’s gleaming facilities in downtown Perham. The companies Nelson struggled to build have become the town’s dominant employers. “What he’s achieved has been just awesome,” Spies says. “There should be more Kenny Nelsons in the world.”