Keeping It Real In Real Estate 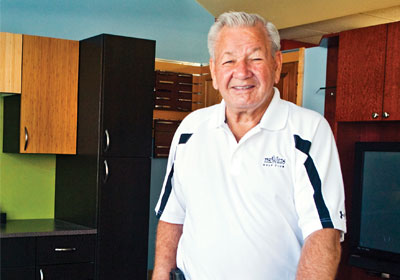 What it does: Develops, builds, owns, and manages residential and commercial real estate

Solutions: Being patient and flexible, seizing opportunities
when they present themselves rather than forcing them

In his half-century as a realtor and 36 years as a developer, Jim Stanton has weathered more than a few storms of economic uncertainty. He’s been in business long enough and his portfolio of properties is deep enough that he’ll be able to ride this one out relatively unscathed.

How will he do that? By building upon strategies he put in place before the current market crash.

One of those strategies is diversification. Though Shamrock has focused on developing land for its own building projects, it also buys and develops raw land that it then sells off to smaller builders who can’t afford to develop a whole subdivision of association-maintained villas. In a typical 100-lot subdivision, Stanton may keep 10 lots for himself and sell off the rest to as many as 10 different builders.

Shamrock also builds and leases commercial buildings. (Tires Plus and Wells Fargo are two of the company’s tenants.) In addition, Shamrock has developed and built seven condominium projects in downtown Minneapolis, including the Bridgewater, Rock Island, and Riverwalk loft buildings.

“I didn’t deliberately set out to diversify,” Stanton says. “I’m one of these guys that evaluates opportunities as they come along. If it makes economic sense, I pursue it.”

Stanton also has adjusted his business model to reflect market changes. In boom times, he didn’t bother with preselling—he just began building. “We’d start just as fast as other builders and wind up ahead of them because we had a product people could touch and feel and walk around in,” Stanton says. “That has reversed now. I don’t know that I’d start a building without having presales. Even if I was goofy enough to do it, the banker would probably tell me that he wouldn’t.”

It’s a steady approach that appears to have kept the real estate bubble from exploding in Stanton’s face. “I’ve done business with Jim for about 30 years,” says Bill Keenan of Eagan-based Builders Development & Finance, a boutique lender that specializes in residential construction and development loans. “In a nutshell, he’s an old-school businessman, where a handshake means something. I think he brings common sense to a whole new level.”

Common sense tells Stanton that he needs to be particularly careful now. “We’ve always been cautious as far as the price we pay for properties,” he says. “I probably watched the numbers a little closer during the big bubble from 2004 to 2007. I was having trouble buying land because the price didn’t make any sense to me. People were paying up to $150,000 for land that realistically should have been half that.”

These days, he’s getting these lots for a third of that. He notes that “you can’t afford to buy the land and develop it yourself right now. But if you buy developed lots at a lower number, you can afford to sit on them for a year or two and you’ll still be way ahead.”

The machinery that Stanton’s crews use to install utilities for real estate developments has been sitting untouched for two and a half years. Still, he’s confident that the dark clouds of economic uncertainty won’t last much longer.

“Right now, there’s not a great deal of household formation,” he says. “Kids coming out of college are moving into mom and pop’s basement. When rents get high enough, people will start buying. And when they start buying, they’re going to need lots.” Stanton will have them ready.