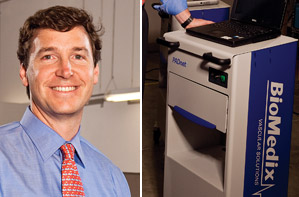 What It Does: Develops software to help diagnose and manage peripheral arterial disease.

At the time, the company produced equipment that helped physicians diagnose peripheral arterial disease. About 8 million Americans suffer from PAD, which occurs when plaque builds up in the arteries, limiting the flow of oxygen-rich blood. (The condition usually affects a patient’s legs.) Patients with the condition are also likely to have a diseased heart; indeed, people with PAD have a four to five times higher risk than the general population of heart attack or stroke.

But BioMedix itself was suffering—from an outmoded business model that required highly trained operators to work with expensive, proprietary hardware. What’s more, the company was working in a static but competitive marketplace populated by the likes of GE and Siemens.

Romans’ vision for BioMedix began taking shape while speaking to the vascular specialists that made up the company’s customer list. “Their frustration was that they had great tools, techniques, and knowledge to treat patients, but those patients needed to come to their vascular labs and to hospitals,” he says.

Romans hired engineers to make the company’s technology useful for nonspecialists. The result was PADnet, a device that allows patients to be tested for PAD by their primary care physician. The test results are encrypted and sent to a secure Web site through TRAKnet, BioMedix’s software platform.

A cardiologist, radiologist, vascular surgeon, or other vascular specialist is notified when there’s a study to be read. The specialist logs on to the site to review and interpret the data and perhaps offer treatment recommendations. If the specialist determines that a more comprehensive diagnostic study is required, the patient is sent to a vascular lab for a duplex imaging study, MRI, CT scan, angiogram, or other test. The patient then returns to the primary care doctor for guidance in managing the condition.

“There are millions of people with undiagnosed PAD,” Romans says. “That’s frustrating for the health care community because if properly diagnosed and treated, this disease can be managed with ease. But if left untreated, it can cause major quality-of-life compromises and be life-threatening. It doesn’t get any better than hearing that someone’s life was saved or that a grandparent was able to go shopping with their grandchild for the first time.”

After becoming profitable in 2006, BioMedix has grown revenues more than 30 percent a year. With a network made up of local hub-and-spoke networks across the country, Romans believes that his company is ideally positioned relative to the needs of health care going forward.

“With our track record of delivering clinical and administrative value to our clients, we have a great infrastructure in place to introduce new technologies that would complement our current services,” he says. “So we don’t have to be the inventor of the next new widget. If it’s out there, we become an excellent choice for being the channel of distribution for new technology.”