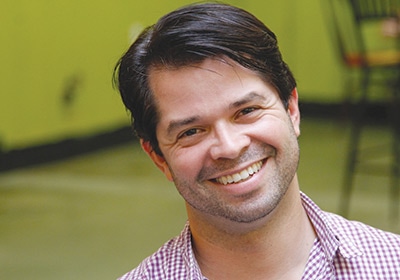 An academic-turned-labor-leader, Morillo represents 6,000 janitors and security officers in commercial real estate, and runs one of four SEIU locals in Minnesota. We examine the current long-term crisis in the union movement.

You and several members of Congress were recently arrested during a demonstration pushing for immigration reform legislation. What did you accomplish?

Every day, immigrants in this country are facing a crisis, and the only way we’re going to get legislation passed is for people in Washington to feel the crisis. So we have to escalate. There’s a common wisdom that, because Congress is so dysfunctional and because of the shutdown, immigration could never get done. I actually am quite hopeful. What we’re hearing from Republicans is that there will be a vote. That’s the reason of an escalation, to say, “Those of us who’ve been fighting this fight have certainly not given up.” And that’s how you make things move in Washington, by not giving up even when everyone else says something is dead.

In 2012, union members accounted for 14 percent of Minnesota workers, down from 16 percent in 2011. Have you bucked that trend?

Local 26 represents janitors and security officers in commercial office real estate. In our last contract negotiations we renegotiated for downtown security officers and added about 1,000 new members in suburban security. A year ago we had about 5,000 members, and we added 1,000 more.

How have you defied the trend?

Nationally, we are now less than 7 percent of the private industry work force, union members. When you compare that to a time in the century when 35 or 40 percent of private sector workers were in unions, that is a dramatic fall. We are in a crisis, and we think it’s extremely important for people in the labor movement to not only acknowledge we are in a crisis but act like we are in a crisis. We can’t do the same things we’ve been doing.

What we’ve done in Minnesota is to work differently with a broader set of community organizations—not unions—to put bigger demands on corporations like Target and U.S. Bank. Right now, there’s a worker center organizing retail janitors who are non-union . . . when we win that campaign, those members will be joint members of Local 26 and the worker center. What we all need to be doing in the labor movement is thinking beyond traditional collective bargaining as the only path to worker empowerment.

One of the mistakes that the union movement has made is that, as the economy changed dramatically, unions did not adapt. We’re organized along the exact same structure, the exact same kind of industrial unions and bureaucracies, everything that was established when the U.S. was an industrial power. And that is just illogical. We need to do what capitalism does, which is to adapt, to change.

Is Minnesota on the forefront of change, or are we lagging behind?

I think we’re on the forefront of that change.

Describe your day-to-day, and your management style.

I negotiate contracts. I am the political face of the union. And the day-to-day of the local is we represent members, handle grievances. I think my biggest challenge along those lines is that if we are behaving like we are in a crisis, which I think we need to, that means paying attention to a lot of big-picture stuff while also keeping the trains running. What our members expect is representation, and we have to balance that and do the bigger work—the larger mission of reversing income inequality in the country for more than just our members.

How have high-profile disputes—Twin Cities orchestras, American Crystal Sugar—affected the environment for organized labor in Minnesota? Is there a need to influence public perception?

What is incredibly important for us is that when we are in the newspaper for our contract negotiations, it has largely been stories of victories. It is very important for working people to have victories and to celebrate victories, and to fight on offense. That’s the key thing that our driving mission is, to not be in the paper for a defensive fight. Not that the Crystal Sugar workers or the orchestra musicians could avoid it, they were put into a defensive position, but what we try to look for is something that is or will become a victory and gives people a different sense of what the union is about. Instead of having unions seen as an obstacle to change or progress, to actually be the instigator of change and progress; on an issue like changing from night cleaning to day-shift cleaning, which saves lots of energy and money and could provide workers more family-friendly hours.

What are your largest challenges?

We work in a subcontracting industry, and we are an entirely private sector union. We also organize in very low-wage industries, and when you look at the economy, jobs that were shed during the recession were largely middle-income jobs, and the jobs that have come back in the recovery have been low-wage jobs. What we are trying to figure out is what the country as a whole needs to figure out—we cannot have millions of people working jobs that are 40 hours but have you living in abject poverty.