It Takes A Village At Lift Bridge Brewing Co. 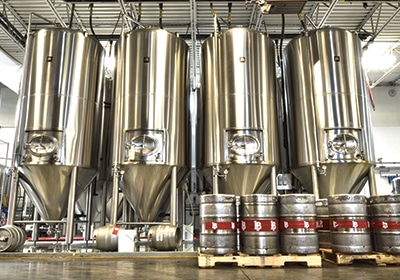 Dan Schwarz and his buddies love beer and Stillwater, so it just seemed natural for them to found Lift Bridge Brewing Co. in a city where they’ve had many good times together.

When it came time for the five friends to take a business approach to their fondness for craft brews, they decided they wanted to integrate their community commitment into the heart of everything they did in their new company.

After launching beer sales in 2008, the business is showing strong growth, with $1.4 million in revenue in 2013.

But Schwarz, a co-founder and the CEO of Lift Bridge, says that he and his fellow entrepreneurs looked for help when they wanted to connect with beer consumers.

Lift Bridge is all about “reflecting the St. Croix [Valley] lifestyle—a little more relaxed, a little bit of a throwback,” Schwarz says.

They needed a brand to capture that essence, and to tackle that task they turned to Studio 2, a St. Paul design firm. Studio 2 had done bottle packaging design before, but Lift Bridge was its first beer. And it was a challenge. Lift Bridge had already released a version of its penultimate beer, Farm Girl Saison, but the owners weren’t sure which direction to take future brews. Would each design be different? Would there be an overarching theme? What would best reflect their dedication to local heritage?

“They asked us to create a family brand that could be brought back to other products,” Bob Powers, Studio 2 creative director, says. This was a risk, because it meant creating designs for beers that didn’t even exist yet. They worked off of Farm Girl’s original design to create the label for Crosscut, Lift Bridge’s second offering.

The visual impact had a link to the past that the founders appreciated. When they started Lift Bridge, it was with the intention of bringing brewing back to Stillwater and the St. Croix Valley, which had a history of brewing beer from the 1800s until Prohibition.

The work Studio 2 did resonated with Lift Bridge. The partnership worked so well that the company’s leaders asked the design firm to create their primary and secondary logos and their website.

“We’ve developed a good sense of trust. They trust us to concept from the ground up,” Powers says. Schwarz and the rest of Lift Bridge’s ownership pool go to Studio 2 with ideas as soon as they have a new beer in mind. They’re open to collaboration, and Studio 2 has even helped brainstorm names. As the working relationship strengthens, so does the brand.

Standardizing the visual brand also meant standardizing how that brand was communicated. Lift Bridge hired Minneapolis-based Lola Red PR to streamline their outreach. “Lift Bridge has great events and a great sense of community,” Lola Red publicist Keegan Shoutz says. “They’re fun and engaging and are always looking for bigger and better things. It helps us build their PR story.”

He says working with a company owned by a group of friends is easy when they’re always coming up with out-of-the-box ideas—such as 2013’s Mini Donut brew released in conjunction with the Minnesota State Fair.

This past summer, Lift Bridge had a series of tastings on paddleboat cruises on the St. Croix River.

Standing out can be hard in the crowded Minnesota craft-brewing scene, but Lift Bridge already has a taste of success. The Twin Cities metro area has been the company’s core sales territory, but it recently expanded into the Fargo, Detroit Lakes and Marshall areas. The company’s workforce has grown to 21 employees.

Of course, expansions require financial investment. Lift Bridge’s owners wanted to add equipment including fermenters and tanks, which would dramatically raise their production capacity to 7,000 barrels in 2013. The consumer market was thirsty for more Lift Bridge beer, but the company’s cash flow couldn’t meet the expansion price tag, Schwarz says. Lift Bridge needed a loan—one that wouldn’t overwhelm it with a huge debt or high interest rates.

“They needed a partner,” says Julie Stewart, a relationship manager at the Minnetonka branch of Alerus Financial. “They’ve been around for a while and are established in the fact that they have a tremendous amount of exposure. We recognized the fact that they need to manage their working capital, and that helped us come up with a solution.”

Stewart evaluated Lift Bridge’s situation. She looked at the management and how the company was doing in the market. Craft breweries have been experiencing rapid growth, and the management team at Lift Bridge struck her as highly detailed in its orientation for executing a growth strategy.

She wasn’t worried about making a loan, but she knew she’d have to get creative to fit their needs. Eventually Stewart and Lift Bridge decided to arrange for a Small Business Administration loan, which offered a smaller down payment, a longer payback period (10 years instead of the traditional five), and relatively low interest rates. It was the perfect option for the small but burgeoning brewery.

Like Studio 2 and Lola Red, the working relationship between Lift Bridge and Alerus is on a firm footing. Trust, openness, and a willingness to try something different are consistent traits of Lift Bridge’s leadership.

Schwarz likes to use inside talent whenever possible. For example, before purchasing energy-efficient equipment, considerable research was done by in-house talent. Yet the moment that the cadre of Lift Bridge leaders recognizes they don’t have the right expertise to meet their next business challenge, they seek external sources.

“One of our missions is to look locally,” he says. “It still has to be a good fit and the company has to have the right skills, but it’s amazing when you look locally, you find what you need right in your backyard.”