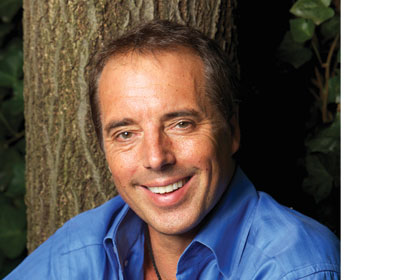 Dan Buettner has spent much of his life traveling the world, bicycling thousands of miles across Africa, Asia, the Americas, and beyond. And he has always made a point of bringing something back from his journeys—not trinkets and mementos, but ways of seeing the world that he can share with others.

The St. Paul native’s love of travel developed back in the mid-1960s, when as a kid he sold Star Tribunesubscriptions door-to-door. Buettner was so successful at his job that the newspaper rewarded him with free trips to places like the Caribbean islands.

A couple of years after graduating from the University of St. Thomas in 1983, Buettner planned a bike trip and set a Guinness world record by cycling 15,500 miles from Alaska to Argentina. Buettner says the accomplishment gave him not only the adventure he craved, but also the opportunity to share his stories through the public speaking circuit. During the next few years, he pedaled his bicycle an estimated 100,000-plus miles across six continents, set two more Guinness records, and won an Emmy for a travel documentary.

In 1996, using satellite technology and via a CNN partnership, Buettner began transmitting videos and stories from his travels into school classrooms. Two years later, he launched a company called Earthtreks to support that effort. He sold Earthtreks to a private equity firm in 1997.

Buettner is currently leading Blue Zones, a research project that he started in 2003 and whose backers have included National Geographic, the National Institute on Aging, and the University of Minnesota. Buettner and his team of researchers look for the globe’s “blue zones”—countries or societies with life expectancies of about 100 years. The team strives to learn these communities’ life-prolonging habits through dietary and lifestyle surveys and by interviewing historians, anthropologists, dietitians, geneticists, and centenarians themselves. The team has so far uncovered five such zones—Okinawa, Japan; Sardinia, Italy; Loma Linda, California; Nicoya, Costa Rica; and Ikaria, Greece.

Buettner has shared the project’s findings through DVDs, magazine articles, TV appearances (including Oprah, Good Morning America, and Anderson Cooper 360), and books, including The Blue Zones: Lessons for Living Longer From the People Who’ve Lived the Longest. “What we have found is that forcing people to diet and exercise doesn’t work,” Buettner says. “We need to change people’s everyday environments in ways that encourage a healthier lifestyle.”

Coventry Cowens, assistant director of multi-cultural and international programs and services at St. Catherine University, nominated Buettner for the award. “He always tries to dig into the communities and has always shared what he learned from his travels,” Cowens says. “With his help, adults in America are thinking about how people in other parts of the world eat and live long and healthy.”