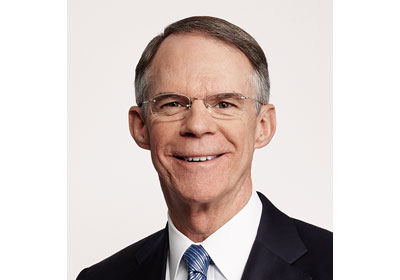 TCB | How much publicity and goodwill has the decision to acquire naming rights to U.S. Bank Stadium brought you?

Richard Davis: First, I want to say that was not the motive. It was to telegraph to our employees and customers that this is our hometown. We love it here, and we are not leaving. Our second motive was that by nature stadiums are happy places. You want to place your brand alongside something that is positive. Some of the money we spent on the naming rights is money we probably would have spent on advertising. Our name is on every ticket. When people attend an event, they use our name. And the recent press coverage has been a benefit. It all adds up.

TCB | You recently launched an advertising and branding campaign in some of your major markets. What do you hope to accomplish with this strategy?

Davis: We are one of the largest banks in America, and we have the highest long-term senior debt rating. We have grown from a regional bank to a national bank. I believe that you don’t tell a story until you have a good story to tell—and our story is so good. Banking in its own right is not that interesting, but what we do is inspirational. We realize we do not make consumers’ dreams come true; we enable those dreams. The “Power of Possible” campaign is a more humble, less arrogant campaign. We tested it in Denver and Cincinnati earlier this year, launched it in Minneapolis this summer after making minor tweaks, and we will roll it out across the country in the next year.

TCB | How challenging has it been to operate in today’s more aggressive regulatory environment?

Davis: In the years following the global financial crisis, precipitated by bad banking behavior across the globe, regulation has become more aggressive and assertive to protect consumers. It’s about performance. For example, the performance requirement for baggage handlers and [for] pilots is altogether different. If a plane crashes, you would be much less likely to fly that airline, but if your baggage is temporarily lost, it’s not as big a deal. Banks used to be more like baggage handlers. If we made a mistake, no one was killed. The new rules say banks can’t make a mistake. It’s like dropping a baby at a hospital—you can’t drop a baby.

Davis: Definitely the economy. When business is slow, banks are slow, and when business is strong, banks are strong. In 2009, the deepest part of the recession, credit card approval was less than 50 percent. You don’t win favor with consumers and influence business if you are always turning everyone down. When things are great, we approve eight out of 10 credit cards. Whatever bank does well will attract the most shareholders. Interest rates are more mechanical. When rates are high, banks do better, but it’s still just mechanical.

TCB | Are there other pressing issues facing you?

Davis: I am trying to better understand my role as the CEO of a large bank. It’s not only about meeting customers’ needs. The responsibility of running a public company is greater than the shareholders or the employees; the community piece is getting to be more important. Our stakeholders are increasingly asking that we be aware of and involved in corporate social responsibility activities (CSR). At our most recent annual shareholder meeting, shareholders asked about CSR issues such as mountaintop mining and renewable energy—whether or not our buildings are LEED-certified.