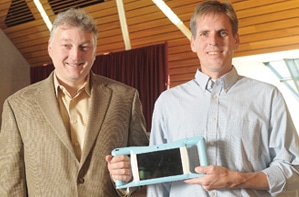 In doctor’s offices, hospitals, and clinics around the world, hundreds of patients each day seek medical care but run into trouble when they don’t speak the local language. Some patients hold back important information because they can’t express it or don’t feel comfortable with the interpreters or medical staff. Occasionally, potentially significant mistakes are made.â©

GeaCom, a Duluth-based company, has developed a multilingual, handheld device with an interactive touch screen that can solve many of these problems and more. â©

Called Phrazer, the device features a virtual medical professional who puts patients at ease by speaking to them in their native tongues and in culturally appropriate ways. Phrazer also works overtime by capturing and recording initial medical assessments such as vital signs, symptoms, and patient history, while communicating the summary dialogue and statistics in real time to health-care providers. â©

“There is nothing like this out there today,” says founder and CEO Mat Johnson. “Phrazer can literally start changing the cost and experience of health care around the world.” â©

In addition to improving medical care, Phrazer can save huge amounts of money for health-care providers in the United States—a group that spends nearly $6 billion on language services annually. Hennepin County Medical Center in Minneapolis alone spends $4 million on interpreters who can collectively speak between 13 and 15 languages—and, thus, communicate with non English-speaking patients. Not only are interpreters expensive; in the United States, up to 500 deaths a day are caused by communication error, Johnson says. â©

Johnson, who grew up in International Falls and Orono, came up with the idea for a multilingual device in 2003. But touch-screen and other interactive technology weren’t yet ready for him. With a background in technical communication, including stints with a Japanese robotics company and consulting for Medtronic, Johnson started GeaCom and developed Phrazer in 2007. â©

GeaCom forged partnerships with Google, Texas Instruments, Sierra Wireless, the Mayo Clinic, and others in an effort to bring Phrazer to market in January 2011. Johnson expects sales to take off quickly, reporting that GeaCom has substantial revenue potential within the next 18 months. â©

A wireless and digital device, Phrazer works by identifying a patient’s dialect in 20 seconds or less. It holds as many as 300 of the most common languages, everything from Hmong and Somali to American Sign Language and Russian. â©

At studios in Duluth and Minneapolis, native language speakers record accentless questions and phrases, providing dialogue for varying audiences—including children, the elderly, and people who can’t read—and for different protocols, like patients having a heart attack or stroke. â©

The device can withstand temperature extremes and varied weather conditions, and it connects to electronic medical records systems. It also gets informed consent from patients for tests and treatments, which can help eliminate errors and lawsuits. â©

With nearly 7,000 languages spoken globally and people migrating more frequently around the world, a device like Phrazer is critical for all medical settings and some other functions—including disaster relief, border crossings, prisons, military operations, law enforcement, and education. â©

For instance, after the earthquake in Haiti, Phrazer could have helped international disaster relief teams communicate with patients in French or Haitian Creole. If patients returned for follow-up care, Phrazer could have used facial recognition software to access their medical records to quickly learn about previous diagnoses or medications given.â©

“We believe the moral high road is the treatment of diverse populations. It has to be done,” says Johnson. “If you live in the wrong area or speak the wrong language, you won’t be treated. We are going to right this wrong.”

It’s easy for companies to get lost in the vast sea of Internet traffic if the content on their Web sites is not engaging. But what if businesses had an easy way to find the best online content—whether a blog post, a video, or an article—package it into their brand or format, and share it with users? They would create an online community that positions them as experts, which could lead to an uptick in Web traffic, more loyal visitors, and maybe even a boost in sales or clientele. â©

That was the belief of Jennifer Iwanicki and Joseph Rueter, who launched Curation Station to help brands operate stand-out Web sites. Owners of the advertising/marketing firm Hello Viking, the pair powered up Curation Station and started to sell the software-as-a-service earlier this year. â©

Iwanicki and Rueter believe the firm has a promising future helping companies select and share the best of the Web with clients and/or employees. “There aren’t many tools like this out there for brands to gather up different kinds of content and share it easily,” says Iwanicki. â©

Inveni is riding the Internet’s personalization trend to offer users a place to manage and control their entertainment ratings, preferences, and recommendations. â©

The company, formerly known as Open Preferences, operates a Web site where users can sign up and get a free account through which they can select the movies and TV shows that they like and swap recommendations with friends. Meanwhile, the site allows advertisers, who provide the revenue stream, to deliver their messages to very specific audiences.â©

“There is a big opportunity to take a major step in improving the quality of targeted ads and the quality of personalized product recommendations and services by bringing the consumer into the loop,” says Chief Technical Officer Rob Bodor, a veteran technology consultant and entrepreneur. “We allow users to share that information, control it, and make sure it’s timely and accurate. As a result, they can get the ads and content that’s relevant to them.”â©

Bodor teamed with Internet entrepreneur Aaron Weber, co-founder of Freeze.com, to start the company in 2008. They believe Inveni will grab a chunk of the online advertising market, which is projected to top $200 billion in 2012, by helping advertisers develop a more targeted audience with higher click-through rates. In the future, Inveni will expand its site beyond movies and TV shows.