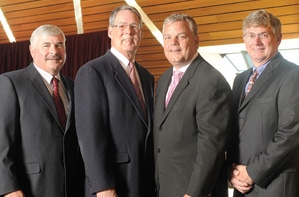 Doug Ruth founded EarthClean with a lofty goal: to change the way the world fights fires. With a team of Minnesota scientists, the company is beginning to impress fire professionals with its certified biodegradable and nontoxic gel, which puts out blazes faster, greener, and more effectively than current methods. â©

Most firefighters use a combination of water, Class-A foam, and toxic retardants to extinguish fires. Problem is, water contends with gravity and falls quickly to Earth. Foam and water can leave fires smoldering, causing them to rekindle hours after the flames get suppressed. And retardants, used mainly to fight wildfires, are under attack from environmentalists and scientists concerned about the effects of dumping chemicals on large swaths of land and water. â©

EarthClean’s fire fighter, called TetraKnockOut or TetraKO, comes in powder concentrate form. When added to water, it turns into a nontoxic gel similar to hand sanitizer, containing 99.5 percent water and the rest corn starch and a secret ingredient. On top of being environmentally friendly, it also works: TetraKO quenches fires up to 10 times faster than traditional means, according to Ruth, CEO of the Minneapolis-based company. And those fast extinguishes can ultimately save firefighters’ lives—and billions of dollars each year in structural damage from water and fire. â©

“Every fire department where we’ve demoed the product or attended a live burn sees the technology and is absolutely amazed,” says Ruth, a veteran IT and software entrepreneur. “We think it’s going to spread like wildfire.”â©

TetraKO is placed directly in fire truck equipment, firefighting planes, or handheld containers. When sprayed out of hoses, it puts out fires while also acting as a fire-protection barrier by sticking to walls and ceilings. When TetraKO is exposed to heat, the gel turns into steam, which quickly suppresses flames and greatly reduces the chance that the fire will rekindle. â©

The scientists and engineers behind TetraKO—two from H.B. Fuller and one from 3M, plus a volunteer firefighter—spent six years developing the product. Ruth purchased the technology and incorporated EarthClean in March 2009 with guidance from its fire operations advisory board. â©
The company recently closed a $1 million round of financing from private investors and plans to seek more capital for expansion. Operating in the $333 million domestic fire-protection market, Ruth projects nearly $400,000 in revenue for EarthClean’s first year of sales after its TetraKO goes to market in fall 2010. He’s expecting sales to accelerate to $4 million in the second year because word about effective new techniques tends to spread quickly through the tight-knit fire community. â©

Ruth says he wanted to launch EarthClean because TetraKO is a ground-breaking product that will drastically improve firefighting, while also slashing costs for manpower, equipment, and resources. â©

“This product is so effective at providing safety to firefighters,” he says. “When I realized that it could provide better fire protection for forests and it’s a clean technology, I knew I had to bring it to market.” â©

The green aspect of TetraKO is another strong selling point, says Ruth. EarthClean had TetraKO independently certified as nontoxic and biodegradable by several labs—a timely move after a federal judge in Montana ordered the U.S. Forest Service, the U.S. Fish and Wildlife Service, and the National Marine Fisheries Service last summer to study how wildlife and fish are impacted by fire retardants, which contain harmful ammonia oxide and phosphorous. The agencies also must develop restrictions on retardants, about 20 million to 30 million gallons of which are used annually to fight wildfires. If they get banned, Ruth says, EarthClean will seek to replenish the firefighting arsenal with TetraKO. â©

“As some of the fire chiefs told me, there hasn’t been this type of innovation in fire products in 40 years,” says Ruth. “This is something that can go into a truck, aid firefighters’ safety, save buildings, and it’s clean technology. That’s pretty dramatic.”