Giving In A Turbulent Economy

Thanks to some creative estate planning tools, there are advantageous ways to be charitable even when times are tough.
April 01, 2020 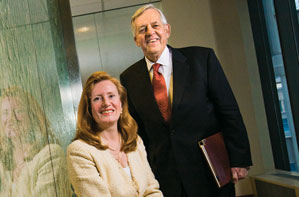 When Ted and Carol Cushmore revisited their estate plan last year, their attorney suggested a creative way to continue to give during the recession: Set up a charitable lead trust.

It would allow them to capitalize on lower interest rates so that they could leave an inheritance to family members and make significant donations to charity—in this case through their donor-advised fund at the Minneapolis Foundation.

“When you set up these charitable trusts, you get more bang for your buck,” says Ted Cushmore, a retired General Mills executive from Edina.

As investment accounts shrink in a down economy, people like the Cushmores may be inclined to scale back their charitable giving. But it doesn’t have to be that way. Thanks to some creative estate planning tools, bear markets actually provide unique opportunities for donors to continue giving generously—and beneficially—to causes near and dear to their hearts.

When interest rates are as low as they are now, a charitable lead trust can be a great way to give. It works like this: Donors create the trust and name their ultimate beneficiaries. But for an initial set amount of time—say 10 to 15 years—a designated percentage of the principal flows to charity every year. This reduces the principal and, therefore, the amount of taxes that beneficiaries pay on their inheritance. At the same time, the donors achieve their philanthropic goals.

“This idea has so much merit right now,” says Clint Schroeder, a principal at Gray Plant Mooty in the trust, estate, and charitable planning practice group and the attorney who advised the Cushmores on their estate plan. “With very low interest rates now, the value of the taxable gift to the donor’s children as calculated by the IRS is lower than when interest rates are high. In addition, these assets are generally worth less in a down economy, so less gift and estate taxes are due on charitable lead trust gifts to children during these difficult economic times.”

Giving in a bear market

In addition to charitable lead trusts, financial advisors have several other suggestions for giving effectively during a bear market. Two options include charitable gift annuities and charitable remainder trusts. With these gifts, donors can specify that they personally—or a family member—will receive a stream of income for a set period of time or a lifetime, after which charity gets the remainder, says Sheryl Morrison, a principal in Gray Plant Mooty’s trust, estate, and charitable planning practice group.

“When people are facing an economy like this, a donor might say, ‘I am charitable and I do want to make a gift, but I’m afraid to lose part of my own cash flow. So I want to keep a stream of income to provide for my own needs during my lifetime,’” says Morrison. “A charitable remainder trust or charitable gift annuity maintains cash flow for the donor who isn’t comfortable giving the property to charity outright.”

Kristine Merta, a financial principal at Lowry Hill, a private asset management firm in Minneapolis, works with many clients who are investigating new or modified ways to give during the recession. She has clients who are donating cash instead of appreciated stock, while others have stretched significant pledges to nonprofits over three to five years.

“People still want to give, but this is hitting their portfolios at the bottom,” she says. “They are either cutting back the amount they are giving or the number of charities they are giving to, or both.”

Many philanthropists opt to give appreciated assets such as stocks, bonds, or real estate to charity. But with the financial markets in the tank and the real estate market close to rock bottom, professional advisors have heard repeatedly from clients who want to scale back their giving because of depreciated assets.

That’s not necessarily the best way to go, says Jim Lund, a certified financial planner and senior financial advisor at Ameriprise Financial in Minneapolis. In fact, using depreciated assets to give during a downturn is an effective strategy that can mutually benefit individuals and charities. In this scenario, donors sell depreciated assets at a loss and donate the proceeds to a nonprofit. Then donors take the charitable deduction against ordinary income, as well as the capital loss. These losses can offset any capital gains investors might have, as well as up to $3,000 against ordinary income. And if they have no capital gains now, they can store them indefinitely for the future.

“Harvesting losses is something we’re doing quite a bit with clients today,” Lund says. “We might not be harvesting all of their losses, but we’re harvesting some of them.”

Additionally, financial advisors are counseling clients who are older than 70½ to take advantage of the law that allows IRA holders to donate up to $100,000 to charitable causes, Lund says. Once people hit 70½, they must take a required minimum distribution from their IRA annually and pay income taxes on the withdrawal. By donating the money to charity instead, they are relieved of paying the taxes.

Jack Swanson, a retired Xcel Energy contracts analyst and Ameriprise client, says using his IRA for making donations has been an effective tool for giving.

“It is a way to save money by charitable giving on a tax-free basis, and it makes common sense,” says Swanson of Maple Grove, who has actually boosted his charitable giving during the recession. “We feel that money is used better in the service area than what we can do with it. It’s working out well.”

One note of caution: The IRA law expires December 31. Unless Congress passes an extension or new legislation and President Obama signs it into law, this tax-saving mechanism for giving will be retired at that time.

Now more than ever

These days, it’s even more critical that people maintain their charitable giving. The nonprofit sector has felt swift and sharp repercussions from the recent recession, and philanthropies are expecting a rocky ride for the rest of the year.

Nonprofits have been caught in an unprecedented swirl of declining donations and an increasing need for services thanks to a familiar litany of job losses, the housing crisis, the credit crunch, and rising prices. And Minnesota foundations, which granted $1.16 billion to nonprofits in 2006, have less money to give charities after the floundering stock market shrank their asset bases.

The Minnesota Council of Nonprofits surveyed 660 of its members in December and found that 55 percent saw total revenue fall in 2008, while 47 percent received less from individual contributors. Both the dollar amounts declined and the number of contributions sank.

“At a painful time when nonprofits are experiencing a decrease in contributions, more people are coming to them for help,” says Council Executive Director Jon Pratt. “Right now, they are making some important decisions—such as reducing their budget or reducing their staff. Others are delaying expansion plans or considering mergers.”

One glimmer of good nonprofit news came from Greater Twin Cities United Way, which projected even results for its 2008 annual campaign compared to the previous year, when it raised $88.4 million.

“We’re seeing that donors in these turbulent times prioritize their giving to make sure people’s human needs are met,” says Randi Yoder, senior vice president of donor relations. “People want to know that their gift will get to the people who need it most.”

In the foundation world, the picture is murky. Almost 60 percent of corporate grantmakers report that they plan to maintain their levels of giving in 2009, according to the Minnesota Council on Foundations, which surveyed 107 of its members in November. But looking at foundations overall—including private, family, and corporate entities—41 percent said they will maintain their giving for this year, 40 percent expect to decrease grantmaking, and 15 percent plan to enlarge it.

“We’re hearing from our members that these are dramatically changing times and much different than past downturns,” says Bill King, president of the Minnesota Council on Foundations. “But with persistence and innovation and tightening everything to mission, we know we’ll get through it. It won’t be comfortable, and tough choices will be made.”

Corporate giving will probably stay relatively stable this year because many businesses make grants through their foundations. By setting aside money in endowments when times are good, they can continue to give even during slumps, King says. Many foundations also employ a three-year look back on returns to determine future giving levels, which can help moderate big swings in the market.

Giving through a corporate foundation has been critical for ADC Telecommunications to continue its philanthropic traditions even when market conditions are poor. The Eden Prairie–based supplier of telecom parts, systems, and services has endured soaring highs and terrible lows over the years, including this year when it laid off 10 percent of its 10,000-employee workforce. Yet its foundation typically gives away $2 million a year—or roughly 20 percent of its assets, says Bill Linder-Scholer, foundation executive director.

The ADC Foundation might reduce grants slightly this year because of the recession, but it will still provide funding to its core causes: organizations involved in math and science education and assisting nonprofits with technology needs.

“The key vehicle for maintaining our giving was establishing a foundation,” Linder-Scholer adds. “Thank goodness the ADC leadership set up the foundation in 1999 when everything was rosy. They put in a bunch of money then and one other time, and we’re still living off that money.”

The nonprofit sector is bracing for trying times in the year to come. “My fundraising career is about 20 years old, and I’ve never seen a situation as serious as this, where we’ve had a financial industry meltdown and a global recession,” Yoder says. “The level of uncertainty of when the stock market will bottom out and how high unemployment will go makes it even more unique and more challenging for us.”

So before you halt or slow your philanthropic giving until the downturn lets up, talk to a professional about the most effective ways to give in a bear market.

The Cushmores are glad they did.

“You can set things up with different instruments,” says Ted Cushmore, “so regardless of the economic situation, you can give in good and bad times.”

Charitable Giving: More Critical Than Ever

In 2008, 55 percent of nonprofits experienced a decrease in total revenue and 47 percent saw individual donations fall. Organizations that were most likely to see decreased individual contributions in 2008 were employment and job-related (59 percent); health and disease-related (55 percent); and mental health and crisis-intervention groups (44 percent). Organizations predict declining individual contributions in 2009; 42 percent expect a drop in the number of contributors, while 47 percent anticipate a cut in average contributions.