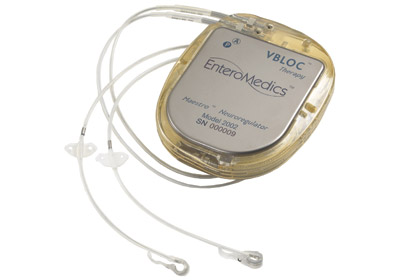 EnteroMedics’ Maestro rechargeable system uses VBLOC (short for vagal nerve-blocking) therapy to help obese patients or those with metabolic disease to control hunger. The Maestro system is implanted laparoscopically and is designed to have lower complication rates relative to traditional bariatric surgery.

VBLOC uses “very high frequency, low-energy electrical signals to inactivate a portion of the [vagus] nerve itself so that the signals that are coming from the brain or to the brain can’t get by that one spot,” says Mark Knudson, CEO of EnteroMedics, Inc., a medical device company that focuses on metabolic diseases and obesity. “By doing that, we address patients’ needs to help control hunger, control feelings of satisfaction, without altering their anatomy or restricting their ability to eat normal foods,” he says.

The Maestro system isn’t as invasive as other bariatric surgeries, which may come with a higher risk of complications. For instance, lap-band surgery involves placing a band around the upper stomach and filling it with a liquid to make the stomach smaller.

The Maestro System can be implanted during a 60- to 90-minute surgical procedure and most patients can go home the same day. A small incision is made in the abdominal cavity and a camera is used to guide two leads with electrodes to the vagus nerve, right above the stomach. The leads touch the two trunks of the nerve on one end and are connected to a battery-powered cell phone-sized neuro-regulator on the other end, which is placed under the skin of the abdomen and controls the electrodes. The Maestro system blocks the body’s nerve signals to and from the stomach. The electrical impulses are programmed to last a certain amount of time, usually five minutes on and five minutes off, for up to 12 hours a day.

Average excess weight loss is 30 to 40 percent if the device is used at least 12 hours per day, Knudson says. Because the Maestro system doesn’t require regular doctor visits and is rechargeable at home with an external mobile charger that the patient places over the device, patients and doctors save lots of time. With lap-band surgery, doctors must see patients several times a year to fill the band.