Engaging Everyone At Work 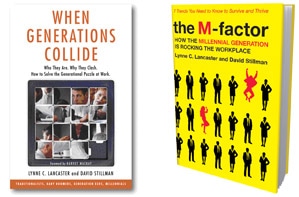 With four generations in the workplace, creating an annual giving campaign that engages people from each may seem impossible—but understanding each generation’s workplace needs and habits can help ensure that in-office efforts reach all employees.

Known for being a loyal generation that’s now comprised mostly of retirees, the Traditionalists are sometimes overlooked when companies create their giving campaigns.

“A lot of people like to dismiss the Traditionalists as no longer important in the workplace [campaigns], and that is very much not the case,” says Debra Arbit, a Millennial speaker and generation expert with Minneapolis-based BridgeWorks, LLC—a company that has been studying generational differences in the workplace since 1997.

Some large companies, including General Mills, even reach out to retired alumni—an “untapped resource”—by inviting them to fundraising events and asking for contributions during workplace campaigns, Arbit says. But for both retired and still-employed Traditionalists, it’s important to show appreciation for their contributions, even if it’s just with a simple thank-you note.

“It’s easy for Traditionalist employees who have been part of a corporate giving campaign year in and year out to start feeling taken for granted,” says Lynne Lancaster, a Baby Boomer who cofounded BridgeWorks and has coauthored two books on generations in the workplace.

Meanwhile, there are two important ways to involve Baby Boomers in company giving campaigns: by offering competition and flexibility. This generation is very competitive, and companies should make its members feel like they are part of a winning cause—perhaps by providing updates on the progress of the campaign and sharing success stories from previous years, suggests Lancaster.

Additionally, Baby Boomers tend to have lots of commitments. Companies need to work around them to ensure that Baby Boomers are represented alongside every other generation on the planning committee—and make them feel appreciated even if they can’t give much time.

Generation X, by contrast, is a skeptical generation, so its members often ask a lot of questions before donating so that they know how their money is being used. Lancaster added that giving Gen Xers control over their giving can help diminish their skepticism.