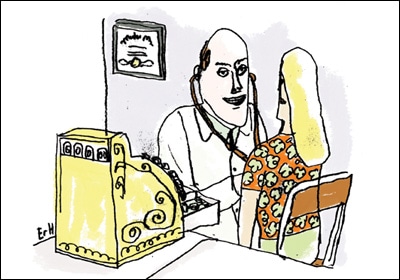 When Chicago-based medical collection agency Accretive boasted in its sales material that “You’ve never seen ASS like ours!” it was referring to what it called Accretive’s Secret Sauce, not its figurative behind, which Minnesota Attorney General Lori Swanson kicked out of the state this year. That “secret sauce,” as it turns out, was partly built on patient harassment.

Take the case of a couple who brought their depressed and suicidal young daughter to the Fairview Riverside emergency room. The girl was curled up in a fetal position next to her parents as they waited to see a psychiatrist. But it wasn’t a psychiatrist they saw first. It was a man demanding $500 before their daughter would be treated. Though the parents knew they had good insurance, they paid to avoid increased distress. “When my daughter heard the conversation,” the mother is quoted in the suit, “it upset her even further during an already emotionally fragile time.”

That testimony, along with reports from dozens of others who say they were similarly abused, led the attorney general to amend a suit she had already filed against Accretive.

The case unfolded almost like a novel. The computer of an Accretive employee was stolen from a car parked near the Seven Corners area of Minneapolis. When the laptop was recovered, it was found to contain unencrypted and sensitive information on 23,500 Minnesota patients in two Minnesota hospital systems—Fairview Health Services and North Memorial Health Care. Swanson began an investigation and set her first lawsuit against Accretive in motion. Then the investigation began to reveal Accretive’s questionable tactics.

The AG’s office found that Accretive embedded employees in hospitals so they could begin dunning patients as soon as they entered the facilities. Some patients got demands for payment before they’d seen a doctor. One fully insured patient in an emergency room with severe gall bladder pain said that before she was diagnosed, a man wheeled in a mobile computer cart. “He told me that the hospital needed payment upfront because I hadn’t hit my deductible yet,” the patient recalled. “He was very intimidating and made me feel like payment was mandatory.”

Accretive said that every example of outrageous behavior came from hospital workers, not Accretive employees. The AG office’s communications director Ben Wogsland says that “they may technically have been employees of the hospital, but Accretive was 100 percent in control of them.” According to the AG’s investigation, “Accretive largely takes control of the scheduling, registration, admissions, billing and collection, and payment functions at its client hospitals. Accretive ‘infused’ its own employees into the staffs of the hospitals.”

This aggressive debt collecting may be offensive, but it is an attempt to solve a real problem. American hospitals are caught between the imperative to treat all patients and the need to stay solvent. In 2010, the more than 5,000 community hospitals in the United States provided $39.3 billion in uncompensated care—predominantly unpaid patient debts or charity care—up 16 percent from 2007, a hospital association estimates.

Accretive settled the lawsuit by agreeing to pay the state $2.5 million, which will be used for emergency room expenses for patients without means to pay. In addition, the company agreed to cease business in Minnesota for two years, and for four years after that, it will have to ask permission from the AG’s office before resuming business here.