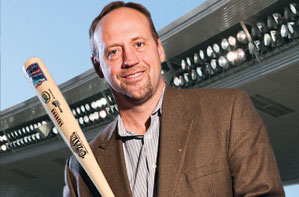 Highlight: Overseeing the ballpark’s construction atop an ancient riverbed with “sloppy soil”

Project manager Dan Mehls rode herd on all aspects of Target Field’s building by Minneapolis-headquartered general contractor Mortenson Construction—from conquering its muddy underlying soil at the start to the finishing touches on its restaurants at the end.

Mehls, who quickly shares credit with Mortenson Construction Superintendent Dave Mansell, was confronted by an extremely nontraditional job in his firm’s own hometown, where its every move would be sure to receive the utmost scrutiny. To name just one of Target Field’s challenges, he cites the need to build it from the “inside out.” All the tower cranes had to be placed on the ballpark’s infield because there was no room for them in the outside spaces.

All the while, Mortenson crews were following complicated designs on soils that could charitably be described as “extremely tricky.”

“The challenge was not so much the building itself but the site that we built on,” he says. “What made it so tough was we were building on top of an ancient riverbed, that we couldn’t close Interstate 394, and that we had to build it over an active railroad with up to 14 trains per day. Not to mention it was up against the Seventh Street Bridge, which is a major corridor, and we couldn’t shut down traffic.”

The site’s soil, he says, was “extremely sloppy. Sediments had built up there for many, many years. We had to dig down 100 feet to hit bedrock. That made it necessary to drive 3,300 pilings, each 100 feet long, down to solid rock. That’s why no downtown skyscrapers had ever been built there.”

The negotiations with the Burlington Northern Santa Fe (BNSF) railroad to move its freight tracks to accommodate the stadium were also key to getting the job done. Part of the deal: Halting construction every time a train came by, which sometimes occurred as often as once every half-hour.